Ricciardo confirms he is staying at Red Bull 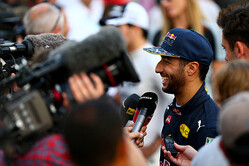 Daniel Ricciardo has confirmed that he will remain at Red Bull until 2018.

Although there have been numerous claims in recent days, neither the team nor driver have officially confirmed or denied anything.

Consequently, the popular Australian is being linked with a number of teams, including, inevitably, Ferrari.

However, speaking at today's official press conference at the Red Bull Ring, Ricciardo confirmed that he is staying put.

Asked if he could confirm that he would be staying with the Austrian team until the end of 2018, the Australian said: "Yeh!"

Following several moments of silence he was asked to expand on his answer.

Asked if staying with the team was his own decision, he replied: "It goes both sides, obviously.

"It's a bit like Kevin (Magnussen) touched on, we want to win, and this year is going to be tough for a world title, but where we are this year is where we are. You can't do anything about that now.

"But looking ahead," he continued, "to next year, spending time with the team, seeing what's ahead, I think it's the best place to be to try and challenge Mercedes. So that's where it stems from."