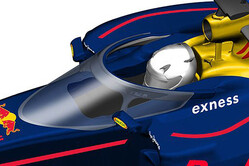 Red Bull has revealed its answer to the Halo safety device due to be introduced next season.

Though the first official pictures appeared on Friday, it was early this morning, hours before the season opening Grand Prix, before the story would be swallowed up by the post-GP deluge of reports and press releases that the Austrian team actually explained its device.

"The subject of head protection is one that Formula One has cooperatively been studying very closely in recent years," said the team in a brief statement, "with several design concepts now reaching maturity.

"During winter testing Ferrari ran a development of the 'halo' concept originally proposed by Mercedes," the team continued. "Today we are presenting images of the design study carried out in parallel by Red Bull Racing.

"Our 'canopy' concept differs from others, with a windshield mounted on twin pillars attached to the coaming on either side of the cockpit.

"The concept is intended to minimise intrusion into the driver's eye-line, while providing protection both in the scenario of a detached wheel – as with the halo concept – and also from other forms of flying debris.

"The canopy will undergo extensive study in the coming months with a view to increasing Formula One's collective knowledge in this field of safety research. Our aim is to aid the FIA in the process of developing a head protection standard to be used in Formula One and, potentially, in other open-cockpit series."

Speaking on Friday, Charlie Whiting confirmed that he is aware of the device but doesn't believe it will be ready for 2017.

"We've tested the so-called halo," he told reporters. "It's been tested quite extensively now, and I think it will offer very good protection for a flying wheel, for example. That's the main way in which it's been tested so far.

"We need to do a thorough risk assessment on it," he admitted, "and we need to look at a number of related things like extrication; we've got to talk to the medical crews about it. I think it's going quite well.

"The Red Bull is an alternative to that," he admitted. "It's considerably further behind in development, it's never been tested, but it could offer additional protection. I've got my doubts as to whether it could actually be implemented for 2017, whereas I think the halo could.

Asked if the introduction of a device might be delayed until 2017 in order to appraise the Red Bull device, or any other alterative to the Halo, he said: "I don't think we would delay if another one was emerging. We are on a course for the Halo as that has been tested thoroughly and we feel that it offers the best all-round protection.

"We do have a thorough risk assessment to do on a number of different accident scenarios," he admitted. "We want to make sure we are not going to make things worse in certain circumstances, so that has to be done. But I don't think we would delay it because we felt there was another better one coming."

Hours after Red Bull went public with its answer to the Halo, fans looked on in horror as Fernando Alonso suffered one of the most frightening accidents in recent history, his entire car and power unit destroyed in the high speed accident that instantly grabbed headlines around the world.

The Spaniard, admitting that he was very lucky to be alive, paid tribute to the work of the FIA in recent years, fully aware that not so long ago such an incident would not have been survivable.

Nonetheless, we can never be complacent and it is good that teams like Red Bull are spending time and money on ways to further protect our heroes. The timing of the team's statement almost uncanny.