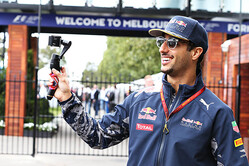 Both GoPro and Red Bull are renowned for the production of content that takes sports fans right to the heart of the action and this new partnership is set to see the Red Bull Racing Team and the HERO4 camera maker push the boundaries of motorsport video to new and thrilling heights. GoPro is transforming the way people see sports by delivering new perspectives and an immersive viewing experience through its innovative camera technology.

Commenting on the agreement Daniel Ricciardo said: "This is a pretty cool partnership. Red Bull is always up for doing things a bit differently and I think GoPro shares a lot of the same values. It should make for some pretty wild ideas and I guess I'll be the one behind the wheel trying to make them happen!"

Daniil Kvyat added: "I've always been a fan of GoPro, some of the stuff produced with their cameras is pretty amazing so to have them as our official partner is very exciting and opens up a lot of possibilities."

Red Bull Racing Team Principal Christian Horner said: "Red Bull has always been known for testing the limits of what is possible in sport and in telling those incredible stories, especially in F1. In recent years GoPro's cameras have become the reference for getting as close to the action as possible, so I think the synergies between the Team and GoPro are wide-ranging and extremely exciting."

Todd Ballard, Vice President of Global Sports Entertainment Marketing at GoPro explains: "We are excited to team up with Red Bull Racing for the upcoming season and capture content from unique locations around the globe. We will be able to bring viewers closer to their favorite team than they've ever been and tell the stories you don't usually get to see. Motorsports has always been one of our passions and we are proud to enter the world of Formula One together with Red Bull Racing.

As an official Red Bull Racing Team Supplier, GoPro will work together with the team to produce specific F1 content for both digital and social channels as well as content features around our filming days, driver activations and our unique live demos where we take our F1 car to fans across the globe.