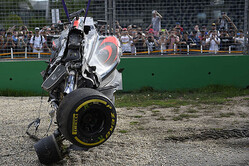 Stewards in Melbourne have opted not to take any further action following today's accident in Melbourne.

The clash saw Fernando Alonso's McLaren destroyed, the MP4-31 clipping the rear of Esteban Gutierrez' slowing Haas before hitting the barriers and then skidding on to the gravel where it was flipped and ended up barrel-rolling.

Thankfully, within moments the Spaniard was out of his wrecked car and waving to the crowds, ensuring the TV cameras picked him up in order that his mother could see he was OK, whilst the stewards brought out the red flag that was to change the course of the race.

"We were racing," said the Spaniard, who was given the all-clear at the circuit medical centre. "I kept in the slipstream as late as I could and at the last moment I tried to move.

"It's tough, you can only see the rear wing, you don't have the full view of the track, it’s the same for him, he's defending and can't see what the other guy is doing. So we are both happy.

"I'm okay," he added, "I'm trying to put everything in place again. It was a scary crash. I'm lucky to be here and happy to be here, and thankful to be here, to the FIA and all the safety, thanks to that, it's probably why I'm alive. We lost the power unit and the car because there was a lot of damage, but I'm super happy to be talking because when you are running at 300km/h, you are always risking your life. If in one of those rolls, you get the wrong hit, you have a serious problem. So I'm thankful and wishing to get back in the car again."

Having heard from representatives of both Haas and McLaren, viewed video footage and spoken to the drivers, officials declared that neither driver was wholly to blame and would therefore take no further action.