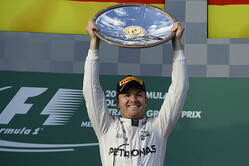 Toto Wolff reveals that team feared brake and tyre issues might cause Rosberg to retire in Melbourne.

Whilst Nico Rosberg appeared to cruise to victory in Melbourne, following the race stoppage brought about by Fernando Alonso's crash and Ferrari's subsequent error in tyre strategy, Mercedes Motorsport boss Toto Wolff insists this was not the case.

"We had a problem on Nico's car with brake calliper temperatures which kept creeping up, almost to the stage where we thought about retiring the car," he admitted. "It was two-thirds into the race. It debris we caught in the calliper.

"Then it stabilised at maximum value," he added. "And then it started to creep down again, very slowly, and recovered. But at a certain stage, it was very difficult for the team to handle.

"He didn't know, you can't tell him," he revealed, referring to the new radio restrictions. "The alarm would come up, we were really super close to that and there's nothing you can do about it."

The Austrian then confirmed that tyre issues were also a cause for concern.

"Fifteen laps from the end, our calculations showed that the tyres wouldn't last. That around five laps to the end, the left-rear could fall off the cliff. The temperatures kept dropping and dropping every single lap.

"Our tyre guy said: 'Five laps to the end, that's it'. You can't really stop them or tell them to go slower because then that would have made the tyre temperatures fall even more.

"We lost a lot of grip on the rear left," he confirmed, "but it is just one of four tyres and we made it last until the end."