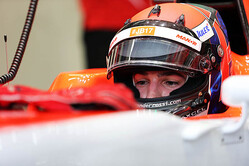 With Manor the only team to confirm its full line-up, and the first pre-season test scheduled to get underway in seven days, speculation as to who will partner Pascal Wehrlein is intensifying.

2015 regular Will Stevens is understood to be in contention, as is Alexander Rossi who made a good impression during his five outings last year. Then there's Indonesian hopeful Rio Haryanto, who is known to have sizeable backing from his government.

Finland’s Ilta Sanomat has put the cat among the pigeons however by suggesting that all three could share the second seat.

It is suggested that for a reported five million euros per driver, Haryanto would contest the Asian events, Stevens the (remaining) races in Europe, and Rossi the North and South American rounds.

At first glance it might look somewhat bonkers, and would do nothing to aid stability or continuity, surely vital at a time the team is expected to make a major step forward, but long-time followers of the sport will know that nothing is impossible in F1, especially if there's money on the table.

Then again, with neither Stevens nor Rossi thought to be carrying much of a bankroll, might Pastor Maldonado still be in contention?