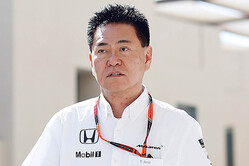 Despite Ron Dennis' refusal to call 2015 an annus horribilis for his team, surely the same cannot be said of Honda, whose much anticipated return to F1 - recreating one of the sport's most legendary partnerships - can only be seen as a monumental failure.

The only records being set by the Japanese manufacturer in 2015 was the amount of grid penalties drivers Fernando Alonso and Jenson Button accrued, over 300 between them.

Truth be told, there wasn't a single moment throughout the course of the season when Honda looked likely to get on top of the situation, the company hardly helping things by keeping the media at a distance.

Finally, Motorsport boss Yasuhisa Arai has spoken out, admitting that his company (and McLaren) paid the price for Honda's "lack of match sharpness".

"The season was really tough and we failed to meet expectations placed on us by fans, McLaren and those who provided support to us," he told The Nikkei. "There are many reasons for that, but I think the results say everything.

"Early in the season, we felt the effects of our seven-year absence from racing," he admits. "We anticipated technological troubles. And although we recognized them, we failed to quickly pinpoint the causes, come up with measures to resolve them and make the necessary adjustments. We were suffering from what athletes call a "lack of match sharpness."

"We participated in our first race of the 2015 season before mastering the complicated hybrid system. We all did our best, but a lot of technological troubles occurred before we could capitalize on our collective experience. We got off to a really difficult start.

"When we tested our car in Abu Dhabi one year before (2014), we encountered problems with our electronic control system. We thought resolving those issues would be enough. But during tests in the winter of 2014, we discovered there were a lot of other things we needed to address, such as the problem of cooling temperatures in excess of 1,000 C and regenerating heat energy. The three test runs we conducted before the season proved useless.

"Up until the Spanish Grand Prix, it was like playing Whack-a-Mole: As soon as we resolved one problem, another popped up. Though we don't disclose the number of people involved in our F1 team, about half of them are new to the field.

"The biggest challenge involved technologies for the system to recycle heat energy and convert it into electricity for use to assist motors. At the Belgian and Italian Grands Prix, called "power circuits" because they involve long straight runs, we recognized we could not catch up with other teams. Even if we increased the power output of our engine, it would lose some 160 horsepower on straightaways due to the shortage of heat energy. We needed to carry out a complete review of the basic hardware design, but we couldn't do that during the season.

"In the second half of the season, we tried other approaches to improve our performance as much as possible. But we had a tough time. Honda faced the same problems that other teams did after F1 rules were changed in 2014.

"Last August, we began studies on an engine aimed at thoroughly resolving our problems for the 2016 season at our laboratory in Sakura, Tochigi Prefecture. I couldn't say we would definitely find solutions within a year. Members of our development team have been extremely busy, because they were simultaneously working to improve our power unit in 2015 and drastically reworking designs for 2016. Our U.K. development centre in Milton Keynes serves as our front-line base for racing; all projects for engine development are being undertaken at the Sakura lab."

Asked if McLaren's 'size zero' approach had an impact, Arai was adamant: "No. F1 cars cannot go fast without proper consideration given to air resistance and the way suspensions move. It's important to minimize the size of power units so that they don't interfere with the car's design. McLaren once told us that we don't have to be aggressive in downsizing our power unit. But we are determined to shrink the size by whatever means possible."

Of speculation that there was tension between Honda and McLaren he reveals: "We thoroughly discuss problems until we see eye to eye. The talks are neither cosy nor confrontational.

Sometime around last summer, they asked if we had sufficient development resources and wanted to know why we were doing things exclusively on our own. They also asked us to use outside personnel, which from their perspective is natural given the high job mobility in Europe. But we explained that Honda has a different philosophy. It's important to nurture manpower. It isn't acceptable to us to have an outside engineer stay for just three months or half a year."

At a time some sections of the media have been claiming gains of over 200 hp, Arai is saying nothing, nor is he willing to discuss budget or personnel numbers.

"We don't disclose details about that," he says. "I can't even talk about percentage changes. But we have been considering the budget and team size since last summer. I've talked with President Takahiro Hachigo and received his pledge for full support; we are ready for the 2016 season.

"We're keen to meet everyone's expectations and reach the podium as soon as possible," he concludes. "We will resolve the technological problems we failed to address in 2015 and will head into the opening race with confidence."