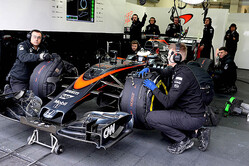 Sebastian Vettel tops the timesheets as Pirelli wet test comes to an end.

As was the case yesterday, it was the McLaren driver (Vandoorne) who encountered the only technical issue, the Belgian side-lined early in the session. Nonetheless, the Woking team was able to complete 127 laps posting a best time just 1.008s off the pace.

Whilst drivers were restricted to ten-lap runs yesterday, today they were allowed longer runs in order to evaluate the behaviour of the prototype tyres in variable track conditions.

"It's always useful to drive a car," said Vettel. "It was fun, even if, with a lot of different prototype tyres, you may get different results, without knowing which tyres we are testing, or if they are going to be used in the future or not. You can have a rough idea which tyres you test and how the tyres were last year, but it's not clear what's going to happen with the tyres after this, even if for sure there are some results, but it's too early to say.

"It was dryer than yesterday, as they put less water on the track, but they provided us with very consistent conditions." concluded the German.

The circuit's sophisticated variable sprinkler system allowed Pirelli to test with different amounts of water on the track, in order to simulate a wide range of wet conditions. This meant that the drivers could try a number of full wet tyre prototypes, with different compounds and constructions compared to the existing 2015 Cinturato Blue.

As this was a 'blind test' the prototypes did not carry any colour markings on the sidewalls, and the teams and drivers did not know which specification of tyres they were testing. All the cars ran in unaltered 2015 specification.