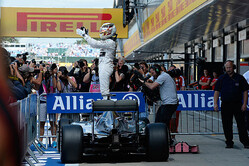 Channel 4 has announced that it is to broadcast terrestrial coverage of F1 from next season.

The move sees the British broadcaster take over the rights from the BBC which is seeking to reduce its spending.

"Channel 4 will broadcast 10 live races, including practice and qualifying sessions, in each of the three seasons from 2016 to 2018," said the broadcaster in a statement this morning. "It will also broadcast comprehensive highlights of all 21 Grands Prix and qualifying sessions - including those shown live by Sky Sports F1. All of the live coverage and highlights will be broadcast free-to-air and in high definition.

"Reflecting Channel 4's track record for innovation in sports broadcasting, in a first for a UK terrestrial commercial broadcaster, no advertising breaks will be taken through the duration of the live races.

"I am sorry that the BBC could not comply with their contract but I am happy that we now have a broadcaster that can broadcast Formula 1 events without commercial intervals during the race," said Bernie Ecclestone. "I am confident that Channel 4 will achieve not only how the BBC carried out the broadcast in the past but also with a new approach as the world and Formula 1 have moved on."

"Formula One is one of the world's biggest sporting events with huge appeal to British audiences," added David Abraham, Channel 4 Chief Executive. "I'm delighted to have agreed this exciting new partnership with Bernie Ecclestone to keep the sport on free-to-air television."

"Channel 4 and Formula One are the perfect partnership," said Jay Hunt, Channel 4 Chief Creative Officer. "We've the same appetite for innovation and we'll be demonstrating that to fans by becoming the first free-to-air commercial broadcaster to show the races ad free."

Details of the 2016 races broadcast live by Channel 4 will be agreed in early-2016. Further details of Channel 4's production and presenting teams will also be announced in due course.

Channel 4 was in talks to take over terrestrial coverage of F1 back in 2011 when the BBC first looked to get out of its contract, a move which ultimately saw the infamous deal with Sky Sports.

The often controversial broadcaster is also home to the superb Toast of London, as well as comedy classics Father Ted and The IT Crowd.

"The current financial position of the BBC means some tough and unwanted choices have to be made," said Barbara Slater, the BBC's director of sport. "Any decision to have to stop broadcasting a particular sport or sporting event is hugely disappointing and taken reluctantly. There are no easy solutions; all of the options available would be unpopular with audiences."

"These are very challenging times for the BBC and sport is not immune to those financial pressures," added Slater, whose job title seems somewhat redundant considering the lack of sport on the BBC these days.