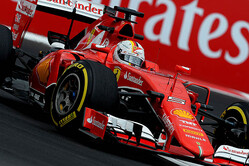 Kimi Raikkonen: "Not much happened in my race today: the start was kind of ok, I had some wheelspin but I managed to keep the position and I could follow Seb down the corner. We had enough speed to keep the fourth position easily, but I had hoped to have a better feeling with the car. I was struggling a bit with the Soft tires and then again with the Mediums. They were ok for a few laps, when they were still new, but afterwards I was not so happy with the handling. Still, I don't think my race result would have been different if we had switched to a three-stop strategy, so we stuck to the two stops as planned in advance. My last stint was probably the best but obviously there was not much I could do at that point, as we were already too far away from the guys in front. We tried to make the best out of it, and fourth place is fine."

Sebastian Vettel: "It was a good race! We were close as we had never been before, which is a massive achievement, considering that Mercedes was pushing all the way, as they had nothing to lose. For sure it is not the most exciting race when you are a little bit alone, but it is still a very nice track, enjoyable on every single lap. It's not easy to get everything right, looking after the tires but still trying to go to the limit. Overall I'm very happy. We know Mercedes have a very strong engine and Power Unit, a very strong car, and that both drivers are doing a good job. So that made their package very difficult to beat, but if you look at our Power Unit, the Motoristi have done a miracle this year and the same goes for the car. Also, let's not forget there was a lot of changes in the team, and that usually takes time to digest. We got into the right rythm straight away, achieving some podiums and winning already the second race of the season, and I think we improved more than anyone else. Now in the winter there is a chance to make a big step but that is also true for the other teams. Our target has to be, again, to make the bigger step compared to everyone. I am told I had more podium finishes than any other Ferrari driver at his first season with the Scuderia: so I hope I can turn all of these 13 podiums into victories next year!"

Maurizio Arrivabene: "Our pace today was good: on some laps we were close to the Mercedes, on some other stages we were matching their lap times and on some occasions we managed to be even quicker. Overall, though, they were quicker than us on more occasions. Looking at the data, we see that despite having no safety car period in this race, we were closer at the end than in most other races this year. And our cars were the only ones not to be lapped! With Seb, we switched from two to three pit stops, fitting Options on his second stint for purely strategic reasons, a three stopper would have allowed Seb to be more aggressive. He really pushed throughout the race. With Kimi, we stayed on the two stops to cover every possible situation, and this explains why he had more tire degradation than Seb. Much of the credit goes to our car and all the people who worked on it all year. Now we move on to Abu Dhabi and the last race of the season. We said we wanted to end up this year in style, and that means we'll be trying everything we can to achieve a brilliant result!"