Marchionne hits out at veto criticism 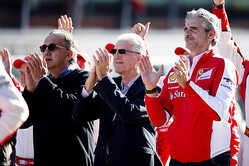 For anyone who was still unclear as to why Ferrari had exercised its right of veto in terms of the move to introduce a cost-cap on engine prices for customers, Ferrari president Sergio Marchionne has left them in no doubt.

The FIA, with the aid of FOM, had sought to introduce a cap on engine prices, and while only Ferrari came out publicly - using its infamous vetoing power - the Italian manufacturer will have had the full support of its rivals. Indeed, speaking in Mexico, Mercedes Motorsport boss Toto Wolff said his company is already selling its units at a loss.

With Ferrari blocking the move, the FIA is now looking to find an independent manufacturer who will produce a cheaper engine, whilst making it clear that if the existing manufacturers accept a budget-cap it will scrap the idea.

Incensed at being painted the villain of the piece, Marchionne has defended his company's stance, blasting the sport's powers that be for their attitude and failure to understand the business thinking behind the veto..

"Thinking that the FIA and FOM can pass to the engine manufacturer the obligation and the financial responsibility to finance their engines to other teams, I consider it an obscene concept," he told reporters at Mugello during the Ferrari Finali Mondiali (pictured).

"I believe Jean Todt is looking for a solution," he continued, "but I think that Ferrari cannot be considered incoherent regarding the development of their power unit. This has to be resolved with Ecclestone and the others. It is not a Ferrari problem and the idea that we could have a moral obligation to provide the engines, it's on the limit. And the same goes for imposing price limits on those power units.

"If somebody would know the costs involved in the development, the prices we talk about don't even cover spark plugs. This is outside any industrial and corporate logic."

So that's a no then Sergio.