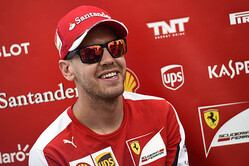 Though the Italian team has taken a significant step forward this season, particularly in terms of its power unit, Ferrari is not yet able to offer a sustainable challenge to Mercedes on all circuits in all conditions.

As the 2015 season reaches its conclusion, fans, broadcasters, the media and even Mercedes is hoping that in 2016 the legendary Italian team will be able to mount a serious challenge.

Talking to reporters in Brazil, Sebastian Vettel, though keen to remain objective, said he believes the team will be more competitive next year.

"It's always difficult to predict what's going to happen but surely it is our target," he said. "Surely I can see what's happening in the background, the work that has gone into this year, the work that is going into next year back in the factory, back in Maranello with all the people, so it looks promising and I think we should be able to make a good step forward.

"Obviously the most important day is when you put the new car on the track and you see what it does," he continued, "but that's still a bit far away. For now I think we have two races left and we want to do well and ideally get the best possible results here and in Abu Dhabi."

Asked about Niki Lauda's recent claim that the Ferrari engine is a match for Mercedes, the German grinned.

"We are not yet a match otherwise this season would have been very different," he replied, "but I'm very happy with the season so far, with the progress we've made and also with the things that I think we have in the pipeline for the future.

"Niki is usually not the best one to trust," he added, "let's put it this way, he's changing his opinion very quickly and sometimes what he says makes sense and other times it doesn't make any sense so, the more he's talking about us the better it is for us because he can feel that maybe we're coming, so hopefully that's good news."

Asked if this weekend's race is crucial to taking second in the Drivers' Championship, thereby splitting the Ferrari duo, he said: "Yeah, obviously there's two races to go. The last one didn't help but yeah, for sure, as long as it's possible to finish second you want to finish second rather than third so clearly our target is to at least try and split the Mercedes and split them the right way but the best way to do that or the best recipe is to just do our job and try to achieve the maximum and then we will see what happens on Sunday."

Referring to comments he made in Mexico, when he claimed that it was his mistakes that led to his eventual retirement rather than a problem with the car, he insisted: "There was nothing wrong with the car, so as I said after the race, (it) was my mistake. I don't think I was very self-critical, I was just honest."