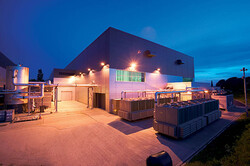 In its infamous wisdom, the F1 Strategy Group, which is asking engine manufacturers to reduce the price of their products after they have developed and built them, indeed agreed to the whole new formula, is also calling for a ban on windtunnels. This at a time when some teams have spent fortunes upgrading old ones and building new ones.

As ever, opinion is divided, Mercedes, Williams and Ferrari are understood to have voted against such a ban, whilst McLaren, Red Bull and Force India were in favour.

"Since I'm not a member of the F1 strategy group there's not really very much I can say," says Monisha Kaltenborn, with just the mildest hint of sarcasm. "I've heard different views. Some say they have been banned, some say they haven't.

"Personally think we should not be banning anything like this, not because we have a wind tunnel which we think works very well. I don't think it's the right way. Whatever we've banned in the past has always come back and it's always been more expensive, so I think you rather have to find a sensitive balance between the different tools you have or create some kind of another borderline and be free actually to do things within that cap or borderline and why should we ban wind tunnels?"

"I can see a time in the future when wind tunnels are banned totally," adds John Booth, whose team, under a different guise, entered the sport in 2010 with a car designed entirely using CFD, "but maybe not for the next two or three years."

"I'm against banning wind tunnel usage because there's always a reason behind it," says Franz Tost. "Some teams are pushing to ban anything, whatever it is, because maybe they don't have the proper infrastructure or maybe they have an advantage with another tool.

"No, we should keep a balance. I think if we reduce the wind tunnel running time, also reduce CFD like we do currently, maybe to go a step forward, then this is the right way, but not to ban anything because there is another way to compensate for it which is much more expensive in the end.

"Everyone is fully aware of Williams's position on wind tunnels," says Claire Williams. "We've made huge investments over our time in Formula One in our... we have two tunnels at Grove and we place considerable importance on them as a tool for developing our race cars, verifying the parts that we develop at the factory before bringing them to the track.

"We believe that there's a safety element in there as well and we absolutely do not and will never vote for the banning of wind tunnels in Formula One. We're very clear on that. And I think they're relevant. How can you operate at the pinnacle of motor sport and not use one of the finest tools in aerodynamics. It doesn't make any sense to us.

"Absolutely, I can only agree with what Claire said," concurs Toto Wolff. "We are a road car manufacturer and we have just commissioned a brand new wind tunnel in Stuttgart because a wind tunnel is needed today to put a car on the street, verify what's being done in CFD and to get correlation. It's a safety aspect and certainly Formula One shouldn't be the playground for funny experiments for opportunistic reasons and following Claire's argument, whatever is being said or is being heard from any vote in the strategy group about wind tunnels is just..."

Asked about the windtunnel's relevance to the world, especially in view of the running costs, Williams hits back: "We've actually done a deep analysis of the costs involved in running our tunnel and how much it would actually save if we closed it and the numbers are not... they don't correlate with the numbers that are currently in circulation at the moment. It is minimal, the amount that you would save. Again, the compensatory elements... you would just save that money elsewhere as F1 teams, any cash that you would save somewhere, you would go and spend somewhere else.

"The relevance of wind tunnels? I think Toto answered the questions of relevance. In the world that we operate in, to be able to verify what you're developing at the factory in the tunnel is hugely important before you get it to the track and we've streamlined what we do development-wise at the factory and the fact that we can bring the upgraded parts of the car that we do now and that they work straight away when we get to the track is because of the work that we undertake in the tunnel. If we didn't have that tunnel capability we would be bringing thousands of parts to the race track at huge expense, wasting a huge amount of money when we realised when we came to Friday practice that they weren't effective and that they didn't work."

"The correlation between the race track and CFD - at least at Toro Rosso - has not reached the level that you get valid results," concludes Tost. "You need the back-to-back tests with the wind tunnel, to know which direction to go, therefore I think they are necessary."