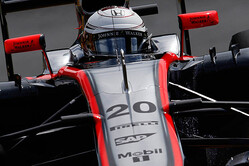 McLaren has dismissed media claims that it has allowed Kevin Magnussen's contract to "lapse".

As the team seeks to turn its on-track fortunes around, attention in some sections of the media has turned to its drivers.

Amidst claims that Jenson Button will continue to partner Fernando Alonso, speculation has shifted to Stoffel Vandoorne and Kevin Magnussen.

Indeed, in recent days it has been claimed that the Woking outfit has allowed the Dane's contract to "lapse" leading to further speculation as to his plans for 2016.

However, contacted by Pitpass, McLaren was keen to dismiss the reports, a spokesman telling us: "We at McLaren never provide details of our drivers' contracts, but we can confirm that recent media reports to the effect that we have allowed our current contractual option on Kevin Magnussen to lapse are inaccurate.

"Eric Boullier has said that we would not stand in Kevin's way if the possibility that he might be offered a race drive with another team were to arise, that is all."