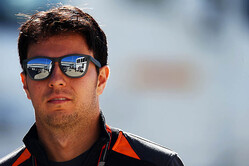 Sahara Force India scored 14 points in today's Italian Grand Prix as Sergio Perez raced to sixth place ahead of Nico Hulkenberg in seventh. The result moves the team back up to fifth place in the constructors' championship.

Sergio Perez: "I had a really enjoyable time today. I had very strong pace from the beginning to the end; I managed the tyre degradation well and I feel we got the maximum that was possible from the race. The first stint was fairly calm: I found myself in clean air and I managed to open a gap over the cars behind so I wasn't under any pressure. After my pit stop, I knew Kimi was closing in behind me: he was really quick and there was nothing I could do to keep him behind any longer than I did. I am very pleased with our performance over the whole weekend and the team really deserves these points. Today's result is important because it moves us back to fifth in the championship with a nice gap over our rivals. We did a good job and we deserve this result."

Nico Hulkenberg: "Seventh place brings some useful points, but I finished the race feeling a little bit frustrated because we didn't have the pace we know is possible. I actually think we had a problem with the car and it's something we need to investigate because I was losing downforce, the car was sliding and the rear tyres were heating up too much, all of which really hurt my pace. The second half of the race was quite difficult defending against Ericsson and that's when we were considering changing to a two-stop strategy because I was struggling so much with the tyres. In the end we decided against it and I was able to hang on to seventh place for some important points."

Robert Fernley, Deputy Team Principal: "To be leaving Monza with 14 points in our pocket completes a very competitive weekend for Sahara Force India. It means we've regained the advantage in our battle for fifth place in the standings and gives us a nice boost ahead of the fly-away races. The circuit certainly played to our strengths, but the team has worked incredibly hard this weekend to get both cars home in the points. Sergio and Nico both drove very mature races, fighting hard when they needed to and looking after the tyres. Nico was less comfortable with the car, so we will explore those issues, but all things considered we can feel extremely positive about our performance today."