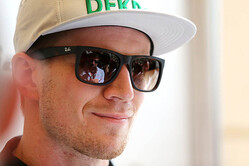 Vijay Mallya: "We come to Silverstone off the back of two strong results in Canada and Austria, two races that have been a big boost for everyone in the team. As we approach the mid-season point, being fifth in the championship is an tremendous achievement, especially when you take into consideration our start to the season. It's a reward for the hard work by everyone in the team, both at the factory and trackside.

"Our recent results are an excellent platform to build on for the second part of the season, with our eagerly-awaited upgrade package making its debut in Silverstone. Everyone is full of anticipation, but we know it will be a very steep learning curve to fully understand and get on top of the changes in just a few free practice sessions. However, I remain optimistic we will see progress sooner rather than later.

"Both Nico and Checo have been performing admirably so far this year and they have seized every opportunity to score points. I have always had the utmost confidence in our driver pairing and I think this season has shown, once again, that we have one of the most competitive line-ups in Formula One.

"Silverstone is a special place for us. It's our local race, with our headquarters just across the road giving a chance for all our factory staff to be close to the action. It is also a great race thanks to the atmosphere in the grandstands: the fans in Britain have an incredible passion for motorsport and they always turn up to create an amazing event."

Nico Hulkenberg: "I'm really looking forward to Silverstone - the team's home race. We go there with a lot of momentum following the strong performance in Austria where we really maximised everything. The circuit suited us, of course, but the field was really close and it was up to us to get a good result, which we did. Finishing sixth was probably the maximum we could get from the race and to come away with a good bunch of points was very satisfying. I am really looking forward to getting behind the wheel of the upgraded VJM08 at Silverstone, which will give us the first impression of what we can expect in the second half of the season.

"Silverstone is one of the best races on the calendar. The fans are great and it's hard to find an empty seat anywhere. The atmosphere is buzzing and that always gives me an extra boost. I usually go to the campsites to see the fans and it's great to see everybody having such a good time. Because it's our home race, I also get to spend more time at the factory with the team members who don't usually go to races.

"As a circuit, Silverstone gives you a great feeling when you're driving, especially in the fast corners: to get a good lap together on such a difficult track is an amazing feeling."

Sergio Perez: "The last two races have been a bit difficult for me, but we still managed to come away with points in Austria and it was a great performance by the team. With the arrival of our upgrade package in Silverstone, it's going to be an important and busy weekend for the team as we try to get all the new parts working together.

"I really like the Silverstone track, with its fast and flowing corners, which are great fun to drive. There is a lot of history and you feel there is something special from the moment you arrive at the circuit. I always performed well there in the early part of my career and I would love to pick up some points this weekend.

"Having our factory next to the circuit makes this a special race for the team. It's a busy one too with lots going on with all our partners and events for the staff. I used to live close to the track - in Oxford - when I was racing in Formula Three, so this used to be my home race for a while and I still have a lot of friends in the area, which makes the week very enjoyable."