Alonso: F1 got it wrong 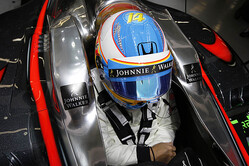 Last week's meeting of the Strategy Group, other than allowing Bernie Ecclestone, the FIA, CVC and the six leading teams from 2014 to discuss the future of the sport, also gave them the opportunity to address some of the major challenges it faces... such as declining TV viewer numbers, spectators and consequently sponsors.

Little of substance came out of the meeting, many feeling that the most controversial move, to reintroduce refuelling, is not only retrograde step but will further drive up costs.

Fernando Alonso, one of the most respected racers on the grid, feels that the talk of rule changes is clear indication that the sport has lost its way in recent years.

"If they happen, we will get rules like seven or eight years ago," he told reporters in Monaco. "For the last four or five years we've been going in the wrong direction."

"When you are eight seconds a lap quicker, that is very demanding physically and mentally and everything was pushed to the limit.

"We cannot run one second quicker than GP2 cars because the grandstands are empty," he observed. "It is a sign it was not going in the right direction.

"Hopefully now it is a good change and we can see the fastest cars in the world in the future."