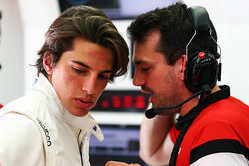 Will Stevens: "I'm reasonably pleased with my qualifying today. I was able to improve on my first run despite making a small mistake, but the car is performing well and I'm looking forward to the race."

Roberto Merhi: "A disappointing qualifying for me. I had a good first run and I was feeling comfortable with the car. After that I was called to the weighbridge but we had an ERS false alarm. When we got the car back to the garage we just ran out of time to do the turnaround. My car crew were pushing hard to try to get another run so thanks to them. It's a shame that I didn't get the chance to improve on my time but I'm looking forward to tomorrow and my home race."

John Booth, Team Principal: "A tough afternoon for the team, particularly on Roberto's side of the garage. Naturally everyone wanted him to have a positive qualifying session at his home track but we encountered a ERS false alarm at the bridge and unfortunately Roberto was stranded there while we made precautionary checks. His car crew pushed him back very quickly but ran out of time for him to get out for his second run. We'll aim to help him have the best possible race tomorrow. Will had a better time of it and got a good clean lap, which was pleasing."