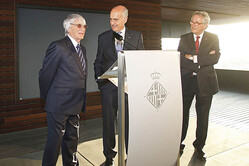 With the renewed agreement, the Catalan track, which first hosted the Spanish Grand Prix in 1991, ensures the event is hosted for three additional years after the end of the current contract in 2016.

"We are extremely proud to announce this renewal in such a special year, marking the 25th anniversary of Formula One Grand Prix being hosted uninterruptedly at the Circuit de Barcelona-Catalunya," said circuit boss Vicenc Aguilera. "We thus extend this fruitful relationship with Formula One and we look forward to the next 25 years."