Hamilton leads the way in FP2 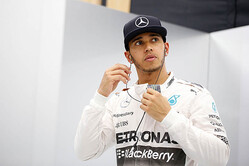 Nico Rosberg led a Mercedes 1-2 this morning, edging out teammate Lewis Hamilton by just 0.070. The Ferraris were second and third, but both around a second off the pace.

Interestingly, whilst Red Bull struggled, Daniel Ricciardo side-lined for much of the morning, the Toro Rossos of Sainz and Verstappen were fifth and sixth.

As expected, most teams were running updates, some more than others, therefore, other than the Mercedes pace, it's hard to get an idea of who's hot and who's not, the true order not really expected until tomorrow afternoon.

That said, Lotus looks to be struggling as does force India, whilst McLaren continues its softly-softly approach.

Rosberg has been given an official reprimand - his first of the season - after a late decision to enter the pitlane which saw him head into the pitlane after the safety bollard.

Having handed over their cars to their teams reserve drivers this morning, Ericsson, Bottas and Grosjean are back on duty this afternoon.

Tyre compounds available this weekend are the hard and medium, the soft making their first appearance over the next ninety minutes, whilst the two DRS zones are on the main pit straight leading to T1 and the back straight between T9 and T10.

A number of teams, notably Williams and Sauber have been having issues with their rear tyres, whilst Ferrari, despite the cooler temperatures, will be hoping that this is one area where they can close the gap to Mercedes this weekend.

The lights go green and Ericsson id first out, though there is no mad rush to join him.

As in FP1, Ricciardo's car is the subject of much attention, the Australian facing another difficult session as the team changes his engine. It's his fourth unit of the season.

Vettel crosses the line at a far more sensible 29.394 as Hulkenberg goes second, ahead of Grosjean. Moments later, Raikkonen posts 30.842 only to be demoted by Bottas and then Rosberg (30.624).

It's that man Sainz again, the Spaniard going second with a 30.439. Elsewhere, Raikkonen complains that he has "no grip whatsoever".

Rosberg leapfrogs Vettel with a 29.075 as Hamilton looks set to improve on sixteenth (34.640). Indeed he does, stopping the clock at 27.826 having been quickest in the first two sectors.

Verstappen does well to avoid several large piece of carbon fibre on the main straight. Replay shows the rear bodywork of the Lotus 'exploding'. The session is red flagged as the debris is cleared from the track.

The session resumes just a couple of minutes later, Bottas first down the pitlane to get things underway. He is joined by teammate Massa as the Grove outfit runs the pair back-to-back over two timed laps.

Vettel is the first to make the switch to options, the German immediately going quickest with a 27.260, almost a 2s improvement but only 0.5s quicker than Hamilton. Raikkonen, also on options, can only manage third (28.035).

As Lotus reveals that Grosjean's bodywork 'issue' was the result of the failure of a couple of fasteners, Ericsson (options) goes seventh (29.488).

Interestingly, on his third lap on the options, Raikkonen improves to second (27.780), still 0.520s off his teammate's pace.

Massa goes fourth on the options (28.712), ahead of Kvyat and Rosberg, the German now sporting a set of the white banded tyres.

Rosberg splits the Ferraris with a 27.616 as teammate Hamilton heads down the pitlane wearing a set of option boots.

As Hamilton goes quickest in the first two sectors, ultimately posting a 26.852, Rosberg complains of "a lot of rejected downshifts".

The times achieved, the drivers, as is ever the case, switch attention to longer runs with an eye on Sunday afternoon.

That said, Alonso is one of the last to make the switch to options, improving to ninth (28.723).

Told that there is not an issue with his ERS and that it is charging, Alonso responds that maybe there is a virus in the team's computer because he is not getting the charge. Moments later teammate Button, now also on options, goes sixth with a 28.494.