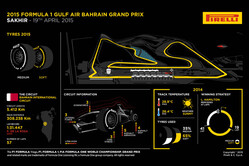 Bahrain, a favoured testing venue in the past on account of its year-round warm weather, hosts the third race of the season where the medium and soft compounds have been nominated, like Australia and China. Unlike these, it is a twilight race: starting in the evening and finishing in the dark. As a result, track and air temperatures tend to fall as the race goes on.

Paul Hembery: "We have the same tyre choice as we did in China for Bahrain, although there will obviously be a bit more temperature involved. However, with the race taking place in the evening, conditions won't be as aggressive as they were in Malaysia – or even Bahrain two years ago, when the race was still run during the day. A defining characteristic of Bahrain now is that tyre performance changes over the course of the weekend as we slowly edge towards afternoon sessions. Last year's Bahrain Grand Prix had a thrilling finish because of the safety car with 10 laps to go, leading to a great battle between the two Mercedes team mates. It's harder to know what to expect this year – apart from the fact that it's very unlikely to rain!"

Bahrain has the highest degree of asphalt roughness seen all year (with the exception of Jerez, used for testing). This accelerates thermal degradation on the tyres. However, this factor is partly mitigated by the fact that track and air temperatures fall as the race goes on, which obviously has an effect on tyre degradation and therefore strategy.

Because of the traction demands of the Bahrain International Circuit, it is particularly tough on the rear tyres: the limiting factor in Bahrain. During the day, ambient temperatures tend to be high, which increases thermal degradation but is not completely representative of the race.

The circuit is surrounded by the desert, which leads to sand blowing onto the surface and decreasing grip levels, particularly at the start of each session. When it comes to strategy, teams will not be able to rely on the appearance of a safety car. Since the race was inaugurated in 2004, the safety car has appeared only twice (in 2007 and 2014).

Last year's strategy and how the race was won: Last year, a rare safety car just 10 laps from the finish levelled the playing field and provided a thrilling battle to the finish. The top six all adopted a two-stop strategy, but there were different choices down the field. Lewis Hamilton went for a soft-soft-medium strategy, with Nico Rosberg going for soft-medium-soft. The German set the fastest lap at the end of the race, but didn't quite manage to pass his team mate after their final stop. Sebastian Vettel was fourth on a different strategy, being one of just two drivers to start the race on the medium tyre.

Expected performance gap between the two compounds: 1.5 - 1.7 seconds per lap.

Expected weather conditions for the race: Dry and warm, starting in the region of 29 degrees centigrade ambient and dropping down to 25 degrees or lower by the finish. The risk of rain is very low, although there has been some light precipitation in the past over the race weekend.