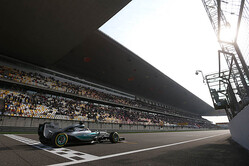 Mercedes driver Lewis Hamilton continued his clean sweep of pole positions throughout the 2015 season and claimed his fifth pole in China, thanks to a time of 1m35.782s on the P Zero Yellow soft tyre. His team mate Nico Rosberg lines up alongside him on the grid tomorrow, just 0.042 seconds behind.

Mercedes built their advantage from Q1, when they were the only team to get through the session using only the medium tyre, which was nearly two seconds slower than the soft. Hamilton's pole time was more than 2.5 seconds faster than the best time set in the dry last year (during FP3, as qualifying was wet in 2014). This confirms the increased performance of the 2015 cars.

Asphalt temperatures peaked at 35 degrees today, which was by some margin the warmest track temperature seen so far in China this year. Similar conditions are expected for the race at 2pm tomorrow, with a negligible risk of rain.

The Q2 session, which all the drivers completed on the soft tyre, underlined the closeness of the competition, with the back end of the field separated by less than 0.2 seconds and a similar margin at the front. The majority of the frontrunners completed just one run.

The final top 10 shootout was also completed on new soft tyres, with drivers pushing to the limit. Hamilton clinched pole position on his first run, with both Mercedes and Ferrari saving a set of new soft tyres in qualifying compared to their rivals.

In FP3 this morning, Hamilton was also quickest on the soft tyre with a time of 1m37.615s, having topped every session held so far in China (apart from Sebastian Vettel, who was fastest in Q1).

Paul Hembery: "We're expecting similar weather conditions for the race as we have seen today, so this should open up a number of strategic options with the increased performance of the soft tyre. However, we've also seen quite a few differences in tyre performances within the teams, so this provides an interesting variable. With the tyres of course being identical for everybody, it's down to every team to make the most of the package they have and this will be the focus of the data analysis tonight. We would expect two pit stops for most drivers, but there is scope to do something different: China has often produced close and unpredictable racing in the past."

Three stops is on paper the quickest option (by one second) for the 56-lap race, but this carries a risk of feeding back into traffic – although overtaking in China is easier than on many circuits, thanks to a wide track layout and several passing opportunities. The fastest three-stopper is: start on soft, change to soft on lap 10, soft again on lap 25 and medium on lap 43. In practice, a two-stopper is more likely. The best strategy in this case would be to start on soft, soft again on lap 12 and then medium on lap 27. If degradation can be controlled, an intriguing but unlikely possibility would be a one-stopper: start on soft and then change to medium on lap 19.