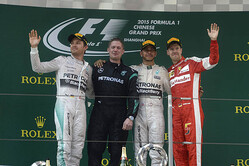 Mercedes driver Lewis Hamilton has claimed his second win of the season in Shanghai, underlining his status as the most successful driver in the history of the Chinese Grand Prix with four wins, having started from pole. The top four used an identical two-stop strategy, with two opening stints on the soft tyre followed by a final stint on the medium tyre. Hamilton set the fastest lap of the race on the soft tyre during his second stint.

The soft-medium-medium strategy was used immediately behind them, but there were some other variations further down the field, including a three-stopper for Force India driver Sergio Perez, and a soft-medium-soft strategy for McLaren's Fernando Alonso as well as both Manor drivers, who finished the race.

The grand prix boiled down to an intense strategic battle between Mercedes and Ferrari, with Mercedes getting the most out of the medium tyre, and Ferrari showing some impressive stints on the soft tyre, putting the leaders under pressure.

Track temperatures gradually fell over the course of the race, making strategy and tyre behaviour hard to predict.

The race finished behind a safety car that came out with fewer than three laps to go, calling an end to the competitive action. The drivers had plenty of life left in their tyres at the end of the race, which they had saved for a final push, but they did not get the opportunity to charge all the way to the chequered flag.

Formula One now heads to Bahrain for the first double-header of the season, where the P Zero White medium and P Zero Yellow soft tyres have again been nominated.

Paul Hembery: "The falling track temperature over the course of the grand prix meant that the race tactics were quite hard to predict. This led to the frontrunners adopting very similar strategies, with some attempting to pit slightly earlier and gain track position with an ‘undercut'. In terms of pure performance, the tyres were in line with or in excess of our expectations."

We predicted that a two-stopper was the most likely scenario for the race, and this turned out to be the case. In our forecast, we said that after starting on soft, it would be quickest to stop for softs again on lap 12 and then mediums on lap 27. In the end, Hamilton went longer than we predicted, stopping on laps 14 and 33.