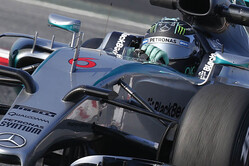 Not for the first time, Mercedes dominated both of yesterday's sessions.

Nico Rosberg was quickest in FP1, whilst teammate Lewis Hamilton did the business in the second session.

However, the day was not without its problems, Hamilton failing to post a time in FP1 due to a power unit failure which he says (groan) "heavily compromised" his preparations.

While Kimi Raikkonen, in the ever improving Ferrari, split the pair in FP2, if you combine the times for the two sessions Rosberg was second to Hamilton overall having gone quicker in the opening session on the harder rubber.

Indeed, rubber is the main talking point, the record temperatures leading to high degradation which not only leaves drivers struggling to stay on the black stuff but promises that tomorrow's race will see plenty of pit stops.

That said, as in Melbourne, Ferrari looks stronger on the longer runs and doesn't appear to suffer with tyre issues as much as its rivals.

Whilst sticking to its usual plan of not going for times on Friday, Williams looks strong, but not as strong as Ferrari, whilst Daniil Kvyat kept Red Bull hopes alive.

Well down the timesheets, Force India has admitted that it will be much later in the season before it is competitive, the Silverstone-based outfit still hurting form its late startto the year.

On the whole, a day without (on track) drama yesterday, a day when it wasn't entirely clear what the true running order will be here. Even then, as we know from experience, this being the monsoon season we can expect the sudden appearance of heavy rain at any time, which will turn everything on its head.

Yesterday, marked the return of Fernando Alonso, and while languishing in 16th place, 2.716s off the pace, he continues to claim that he has never been happier. Is anyone else out there finding this all a little strange?

Ahead of today's session, which takes places three hours later than yesterday's opening session, the air temperature is 33 degrees and the track temperature is 61 degrees, humidity is 46%. More importantly, there is a 60% chance of rain.

Once again, tyres available this weekend are the hard (prime) and medium (option). There are two DRS zones, one on the start/finish straight and the other on the final straight.

The lights go green and Bottas leads the way, followed by Vettel, Stevens, Raikkonen and Maldonado.

Overnight, Honda has chosen to change the engine in Button's car, therefore, like his teammate, he is now down to 3 units for the rest of the year. However, as we reported yesterday there are plans to change the regulations and increase the power unit allowance to five again.

More and more drivers appear, all on the prime rubber except for Stevens who is on the options. The Briton posts the first time of the day, 1:49.397.

A wobble for Nasr as Vettel, his overall around his waist, watches from his garage.

"We're seeing some of the hottest temperatures on track that we can remember," admits Pirelli. !Big test for the tyres."

As Raikkonen complains about a move by Grosjean, the Frenchman appearing to slam the door shut on the Finn (twice), the Ferrari driver is told to pit as he is thought to have a puncture.

Behind the Red Bulls and Toro Rossos, the Lotus duo go fifth (Grosjean) and sixth as the Noah's Ark effect continues.

Watched by his father, Verstappen admits "it's so easy to lock the fronts, it's unbelievable".

Elsewhere a big lock-up followed by a bumpy ride across the grass at T9 for Perez.

Twenty minutes into the session, Bottas, Vettel, Massa, Button, Hamilton, Rosberg and Alonso have yet to post a time. Raikkonen has posted a time but it's 16s off the pace.

As Rosberg begins his first flying lap of the day, on primes, Alonso heads down the pitlane. The German complains of a "lot of wheel spin" at his practice start.

As Rosberg goes quickest in S1, Merhi spins at T9 but is able to continue. Elsewhere, a big wobble for Bottas.

Rosberg crosses the line at 40.392 to go quickest, the German quickest in the first and third sectors. Vettel heads down the pitlane.