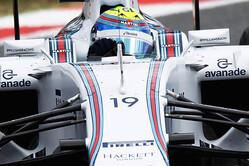 Valtteri developed a back injury during qualifying which hindered his ability to get the most out of the car and had to settle for P6. He has subsequently been taken to the Alfred Hospital for precautionary checks.

Felipe Massa: Mercedes have been ahead all weekend so we knew that on pure pace we were fighting for the best of the rest. Qualifying P3 means that we have done a very good job in getting the most out of the car; especially as the Ferrari's looked strong and were pushing us hard. It will be a tough battle tomorrow so we need to get the start right and have a good strategy to secure a podium and really start the season on a high note.

Valtteri Bottas: It was great to finally start the season and to have a very tight qualifying session. The car performed well and we were fighting with Ferrari throughout. Unfortunately towards the end of Q2 I started to feel a pain in my back. Under the circumstances I'm happy with sixth place, but as Felipe proved, this is not a true indication of our pace. Given the back complaint I had during the session, the team and I felt it sensible to get me checked out at the local hospital and we await their diagnosis.

Rob Smedley, Head of Performance Engineering: It was a bit of a mixed qualifying for us today. On the one side Felipe was able to show the speed of the car and there was still margin left in his lap which puts us in a good position for tomorrow. Valtteri had a back complaint develop during qualifying which hindered his ability to set the sort of time he was capable of and had to settle for the third row. The race will be challenging strategically, but the car has shown very good long run pace which will stand us in good stead tomorrow.