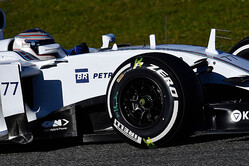 Valtteri Bottas: It was a very productive Friday; whilst Felipe was unlucky with a technical problem and lost some running, we managed to complete our run programme and get as prepared as we can for qualifying and the race. Straight out of the box the car felt good; it was particularly good in the long runs and the tyres felt consistent with not much drop off in performance. We can still find improvements in the short run pace and do more to unlock the tyre performance over one lap, so that will be a focus in tomorrow's third practice session.

Felipe Massa: It's a bit disappointing to have only run in one session today; a water leak in the power unit required a repair. The more you run the more you understand the best direction to take with the set-up and what the track conditions are like, but at least I managed to get some valuable laps under my belt in the morning and the overall feeling from the car is positive. It's also good to identify any problems early on rather than experiencing them in qualifying or the race.

Rob Smedley, Head of Performance Engineering: We picked up a lot of data on Valtteri's car and completed all of the tests we had planned so it was a good day for him. Unfortunately our post FP1 inspection identified a water leak on the power unit of Felipe's car. This required the power unit to be removed from the chassis to repair, which resulted in Felipe missing FP2. We didn't have any other reliability issues with the car that are causing us concern. For us a Friday is not about making headlines or chasing laptime; we keep our heads down and diligently go about our business. That is exactly what we have done and I'm pleased to see that the team has picked up from where we left off in Abu Dhabi and worked well as a unit.