Ferrari bosses used the used the company Christmas lunch to inspire and rally the troops to a bold, bright, winning future.

The annual get together began with a word about Jules Bianchi and Michael Schumacher, two drivers both very dear to the Maranello team and who are currently fighting a long and difficult battle.

The speaker was Maurizio Arrivabene, who made his first appearance in his new role of Managing Director of the Gestione Sportiva and Scuderia Team Principal, after many years as part of the senior management at Philip Morris. Arrivabene also paid tribute to Emilio Botin, the Santander Bank President, who passed away in September, before describing his feelings on taking on his new role.

"I am very proud to work for this company, which is the best there is," he said. "A company is it's people and in this case, they are special people. Now we are here to look forward to Christmas, but as from January, I want to see you not on the defensive but on the attack, because the aim is to get the Scuderia back where it should be."

On the stage was an F14 T, as well as an Alfa Romeo 6C, the car raced by the very first Scuderia Ferrari drivers, when the team was established 85 years ago. Piero Ferrari paid tribute to the courage of his father who, in 1929, which was a year of great crisis, decided to enter gentlemen racers in Alfa Romeos.

The President of FIAT-Chrysler Automobiles, John Elkann, also spoke about Ferrari and Alfa Romeo, stressing the strong ties between Ferrari and the Agnelli family. "Ever since my grandfather did a deal with Enzo, Ferrari has been something completely special for us. With mutual respect we have always worked together, getting great results," said Elkann. "We are very closely linked to Ferrari and we are working on ensuring it has an even better future. On the track too, there is a lot of work to do, but we are determined to make available everything necessary to get the Scuderia back on the right road. I am pleased to see there's also an Alfa Romeo on stage because 2015 will also be an important year for this great marque." 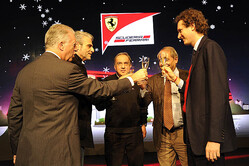 Company President Sergio Marchionne ended the lunch with these words: "In this room, there are many very talented people. I am here to get you working at your best and to give you the necessary resources, which when combined with your ability will put our fantastic driver pairing in a position to fight for the front row. That's why I decided to bring in Maurizio Arrivabene, who will ensure that you and Ferrari will benefit from very efficient leadership. I have full confidence in Maurizio. He has known this world for a long time and has the ability to steer the Scuderia in what is a difficult period for it and for Formula 1 in general. Do not fear change, be proactive and have the courage to come up with ideas. I know you can do it and that's what Ferrari needs."

Marchionne went on to thank the technical and commercial partners. "Thanks to you all," he said. "True partnerships can be seen in difficult moment like these and not for a single day did I feel your support was lacking and I assure you that has not gone unnoticed."

With the lunch over, Ferrari, Arrivabene Marchionne, Ferrari Managing Director Amedeo Felisa and Elkann (pictured left to right) stepped up on stage to wish everyone well and then it was time for photos all round, with the man who will be team-mates with Sebastian Vettel (who was not present) next year, Kimi Raikkonen being particularly in demand, as well as Fernando Alonso making his last appearance for Ferrari.