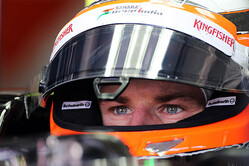 Nico Hulkenberg: "Up until the final laps my race was going pretty well: I had good pace and a good feeling with the car. We made some progress early on, pitted late and we were able to jump a few cars in the first stop. I can't say it was a very eventful afternoon for me; I was on my own for most of the time. The conditions were pretty difficult right from the start: visibility was pretty poor, even if you were in the first half of the pack. It was probably the same for everyone because it's always a challenge in the wet. When the final safety car came out we decided to pit again as I had already been out on those tyres for a long time and I needed new rubber to finish the race. I am happy to get points after a difficult Saturday; we made up for it today. Suzuka is a difficult track to race on in the wet because there are lots of places where you can aquaplane and have a moment. I didn't see what happened in the accident that ended the race, but I hope Jules is OK."

Sergio Perez: "The conditions were very difficult today. When we started the race I could not even see the car ahead of me. To begin with, it was just a race to avoid aquaplaning and trying to keep the car on the track because the visibility was very poor. Our strategy was working quite well, but I think we were unlucky to make our final stop, which dropped me down a couple of positions. Like everybody my thoughts are with Jules and I hope we hear some good news soon."

Robert Fernley, Deputy Team Principal: "Our thoughts at the moment are with Jules Bianchi and we hope to hear positive news regarding his condition. It was a very dramatic race with action going on throughout the pack as the track dried initially before the rain returned. We took a risk at the end to pit both cars as the safety car came out, which would have protected us in the event of a restart. Both drivers drove very maturely and scored points, but everything has been overshadowed by the incident that brought the race to a premature end. Jules and everybody at Marussia are firmly in our thoughts at the moment."