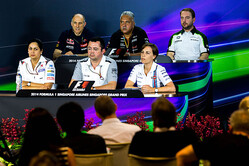 If I could I begin with a question to all of you? Obviously there have been changes today to the team radio ban. The FIA met with the media earlier today but I wonder if we could get a perspective from the teams: why the changes were needed and what it was like today to manage the relationship between the pits and the drivers? Monisha, maybe you would start?
Monisha Kaltenborn: The change comes from complaints that were raised by the fans that the drivers receive too many instructions and are just, in a way, carrying out whatever instructions they have been given. That's something we as teams of course understand and that that's not exciting for the event and for the show. So I think it was the right decision to say that we should try to stop these type of instructions and that the drivers do more on their own. As a team, we were a bit surprised to see what extremes the first clarification went to, because we felt that it went into areas that could have raised other concerns as well. So we're quite happy that the FIA has now taken this position to really just cover areas that were meant to be covered, performance of the driver and not, as such, the entire car.

Franz, can I ask you, because obviously you've got a 20-year-old in your car and next year you've got a 17-year-old. So to what extent is it a disadvantage not being able to quote-unquote 'coach them'?
Franz Tost: The changes are absolutely not necessary and I still don't understand why because all these information are also entertainment for the people in front of TV, to hear a little about the communication between the team and the driver. And for us, of course the more inexperienced a driver is the more information you have to give him and it requires a lot of work during the week to work out the programme and we still have the possibility within the regulations to communicate in a proper. For me it's absolutely nonsense what we are discussing here, because in all the other kinds of sport a coach gives some information, instructions to a footballer player on the sidelines or whatever. This does not mean that the sportsman is not able to do his job. He can do his job, he does do his job, but maybe he can do it in a better way. It's just a performance improvement, therefore I don't understand it.

Manfredi, what's your view on this? You too have got a rookie in your car. Do you share Franz's view?
Manfredi Ravetto: First of all, I have to say, it's remembers us a little bit of the good old days. I think so many nice pages of motor sport history have been written without pit to car communication. Having said this, we take it easy. It's a decision from FIA and we have to accept and respect it.

Vijay, you're active in many sports, you car a lot about the show. What do you think about this?
Vijay Mallya: You know, the FIA rule has always existed: that the driver should drive unaided. But despite that rule being in existence, teams have taken pit wall to car communication to a certain level and now we have been asked to pull back. It's as if we have been abusing the regulation in one form or another. This is not Playstation. Whatever you may say from the pit wall, the amount of influence it actually has on the driver and the excitement of the race and the race result is something that is highly debatable. But then, the FIA makes the rules and it's the obligation of every team to abide the rules. So I guess we will abide by the rules that were fortunately clarified to a more practical extent this morning.

Claire, you've got one of the more experienced drivers in the field, how has it been for you?
Claire Williams: I think it's been OK. I think it's an adjustment for everybody, but as Vijay said, they are the new regulations, they have been put forward in an effort to make the show more exciting. But I'm pleased that the new directive that came out this morning has adjusted what is and what isn't allowed to be said and it has clarified that. From our perspective, as long as we are able to communicate messages around safety and reliability to our drivers, that's the most important thing. But we're racers at heart and we want our drivers to be going out there and driving the cars.

And Eric, your feelings? You've obviously always been very involved in this side of things, do you have any concerns about what is and what isn't allowed?
Eric Boullier: Yeah, obviously we had some different messages internally during both free practices, like 'shall we say this' or 'shall we not say that'. So we had to police a little bit, or monitor what we wanted to say. In the end I think most has been said by my colleagues. The only thing which was worrying a little bit is to change the regulations during the course of the season, which is never a nice thing to do, even if we obviously listen to the fans and obviously respect the decision of the FIA. Happy as well that they clarified a little bit what can be said and not. And obviously happy that we can still say or deliver some message about safety or reliability of the cars.

Coming back to you Monisha. Can you give us an insight at the heart of the team at the moment? Do you need to shake the tree to break this cycle that you have got into this season? And also, can you tell us what the latest is about Sergey Sirotkin and whether he'll run in free practice one?
MK: Well, we're probably having the worst season we have had in the history of the team so far. We know the reasons for it. We've been trying to make changes, which not easy when you have certain limitations that you have work within. We're step by step coming out of it. The steps in my view could be bigger sometimes, that they are a bit more measurable. But the direction is right. So, we have to be patient, focus on the right things and hopefully get out of it. Coming to Sergey, we have announced that he will be driving FP1 in Sochi. That's one of the milestones we have agreed with him and then we'll see where we go from there.

Thanks for that. Vijay, coming back to you, you're neck-and-neck with McLaren for fifth in the Constructors' Championship. How do you deploy the resources then from here for the rest of the season. Do you want to develop hard this year and try to beat or have you also got one eye also on 2015?
VM: As you rightly said, McLaren is just one point ahead - literally as well, as we sit. Having said that, it is my intention to reverse that. We will do everything possible to achieve that by the end of the season. I'm sure they are developing their car and so are we. Unlike previous years I think all developments done this year will, in fact, carry over to next year's car. So whatever investment is made I think it's not lost on 2014 alone. But we enjoy tough racing - I'm sure McLaren do too - and we'll have some fun and let's see in Abu Dhabi who's ahead of whom.