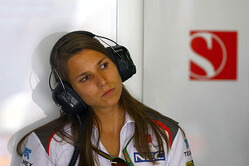 Simona De Silvestro's hopes of securing an F1 seat have been scuppered after Sauber ended its testing deal with her.

The 25-year-old Swiss, who left for the US when she was 18 to drive in the Formula BMW USA series and subsequently the Atlantic Championship before heading to IndyCar, was unveiled as Sauber's "affiliated driver" in February.

In April she completed her first day of testing in an F1 car at Fiorano, albeit a 2012 C31 without KERS and with special tyres from Pirelli.

Her hopes of securing a full drive with the Swiss team, or even an FP1 appearance, appear to have been dashed however due to lack of funding, a spokesman for the Swiss outfit, which is itself the subject of much speculation these days, admitting that the youngster's programme has been curtailed due to financial reasons on her side"

"Everybody in the team who worked with her during the last six months is very disappointed it came to this point, because they liked working with her," he added.

Winner of the prestigious Indy 500 'Rookie of the Year' Award in 2010, De Silvestro became the first woman to earn a podium finish on a street circuit in IndyCar.