Sirotkin to make debut at Sochi 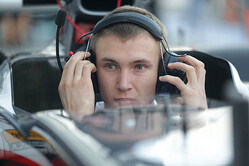 Russian driver Sergey Sirotkin is to drive the Sauber C33 in FP1 at the forthcoming Russian Grand Prix at Sochi.

The 19-year-old, who has already driven part of the new circuit for a promotional event, looked likely to race for the Russian team after being recruited in late 2013.

However, opting to retain Esteban Gutierrez (and his sponsors) for a second season the Swiss outfit named the Formula Renault 3.5 contender as test driver.

Sirotkin, who will be making his F1 race weekend debut at Sochi, participated in the official test following the Bahrain Grand Prix in April, finishing eighth overall.

Over the course of the season thus far, test and reserve driver Giedo Van der Garde, widely tipped for a race seat in 2015, has taken part in seven FP1 sessions.