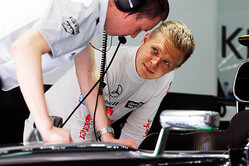 It was the hardest point he ever earned, admits Kevin Magnussen, and he's probably got the scar(s) to prove it.

OK, it wasn't nearly as bad as some sections of the media portrayed it, but spare a thought for poor old Kevin's burned bottie.

"For Kevin, who had driven such an excellent qualifying lap here yesterday, this afternoon was gruelling; there's no other word. His first stint was satisfactory, but in stint two he began to experience tyre degradation to a greater degree than we'd predicted, forcing us to convert his strategy from a two-stopper to a three-stopper.

"To add injury to insult, he was then subjected to severe bodily discomfort as his car's cockpit began to overheat, necessitating his holding his arms aloft, first one then the other, in an effort to direct cooling air down his sleeves and inside his race-suit, which was an unusually painful complication for him."

However, the Dane's cries and those waved arms, certainly in the eyes of a sceptic such as Gurmit, could only mean one thing...