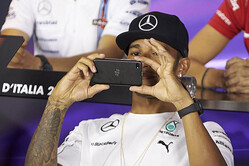 Facing the assembled media for the first time since that incident, the attitude of Mercedes two drivers was in stark contrast today.

Whilst, Lewis Hamilton, grinned, took selfies and joked with the media, a contrite Nico Rosberg sat there, arms folded, looking as though he wanted to be a million miles away.

Though there were four other drivers present at the official press conference, it was the Silver Arrows duo that was the centre of attention, two-time world champion Fernando Alonso reduced to the roll of 'Ambassador of Peace'.

"This is the first time there's been so many people in the room," joked Hamilton, who went on to say: "I am excited about moving forward. And I am excited to be here. I hope we can have a good weekend.

When asked, in light of what happened in Belgium, if he still trusted his teammate, the Briton replied: "I already said everything in the press release. Trust is a big word and that is not something I would apply to racing on the track. Me and Nico have been racing a long time and we set a foundation in karting a long time ago and that is what we work from."

Despite his eagerness to "move forward", Hamilton, when asked if he felt the Race Stewards should have acted in Belgium, made it clear that there are still issues.

"Can we race a lot closer and if the other guy is out of the race nothing will happen? Or if it happens again will there be a penalty?" He said. "We are always asking to be able to race. But there is a fine line."

Meanwhile, Rosberg says he was not ordered to apologise for the incident, that the decision was his, and his alone.

"They can't make me apologise," he said. "It was definitely a decision that came from me. I took the week to think about it, have a look at it and then discuss with the team on Friday and in the end decided it was me who should take responsibility for it.

"I was not proud of the way it went in Spa, because in general I really want to contribute to my 'sport'," he added. "I want it to be the most entertaining sport in the world and if I am able to contribute I am very happy about that and I'm sure we have."

Sandwiched between the pair was Fernando Alonso, who, it was suggested, might adopt the roll of 'Ambassador of Peace', a suggestion even the feisty Spaniard had to laugh at.

Showing what some might call a worrying loss of memory, Alonso claimed that when he was partnered with Hamilton at McLaren in 2007 he never had a problem with the Briton.

"As I've said many times before it wasn't a problem with Lewis, we had a very professional relationship and there were very competitive people inside the team... that was quite normal," he said.

"I think in 2007 the team didn't work as we wanted. It didn't work because I was not happy with some of the philosophies and the team management at that point and had more possibilities to go into different teams the year after and we decided to go on from there. But I never had a problem with Lewis and it's not a surprise today we still have a good relationship."

Just watching the Mercedes duo at today's press conference it is clear that the matter is far from resolved, and whilst Hamilton insists it is time to move on one cannot help but feel that he is protesting just a little too much.

Meanwhile, as ever, playing his cards very, very close to his chest, Rosberg refuses to get drawn into the game and will instead focus entirely on what really matters.