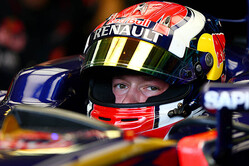 Daniil Kvyat: "That was a tricky qualifying session and until the last run I wasn't too happy with the car handling. But we tweaked a few things and in the end I was much more comfortable. I would say that my last run in Q2 was quite representative, even though I think we could have been faster if it had been dry. Tomorrow will be a different situation, since the race is very long and anything can happen. We will definitely push hard and hopefully we can grab some points."

Jean-Eric Vergne: "Q1 went well but then unfortunately we had an issue with the exhaust system, which compromised my Q2, being able to run only three laps and the timing was not the best one. It's a shame as we had the car to make it to Q3 today. Nevertheless, we have seen during the weekend that we have got the pace to do well, long runs looked pretty good. Considering that tomorrow the race should be in dry conditions, starting from P12 is not too bad, as everything is possible."

James Key (Technical Director): "A tough session today. Obviously we are disappointed not to have made it to Q3 as, looking at our car performance along the weekend, that was definitely our target. Q1 was very much a game of getting the right tyres on at the right time. The team did a very good job and the drivers responded really well. Q2 was tricky as it started to rain at the beginning of the session. Daniil ran two sets of tyres, unfortunately he didn't quite make it to Q3 at the end for just a tenth. We'll have a look to understand why. With JEV, unfortunately he had a clap on his exhaust system which came loose and needed to be tightened up. That meant that he missed the initial run and he had a single opportunity at the end. I also think we probably could have sent him out a bit later than we did, because the track was definitely better towards the end of the session but at that time it was difficult to tell. All these factors really effected his session. All this said, I'm still convinced that we are in a position to fight for the points tomorrow."

Ricardo Penteado (Renault Sport F1 track support leader): "As always in Spa when it rains, it's very difficult to put everything together absolutely perfectly. We continued to refine the Power Unit maps during FP3 and everything worked well in qualifying, even if we constantly tweaked the settings as conditions evolved. We had the pace for the top 10 so it's unfortunate to just miss out but we are well placed for the race nevertheless."