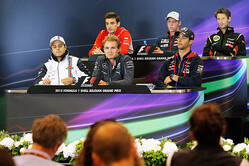 Can I start with a question to all of you? We had news this week that next season there will be a 17-year-old driver on the grid. Can I have your reaction from a driver's point of view? And maybe we'll start with Felipe.
Felipe Massa: Definitely, he's a very quick driver. He shows talent in a go-kart, in Formula 3, winning many races; I think he's second in the championship. It's his opportunity. First of all, I think it's great that teams are still interested in the talent of the driver and not the money and I think that's really positive, it's good for the sport in general. I'm happy for that. Seventeen is a little bit young! For sure, we need to wait and see how he's going to perform in his first year. I think the most important thing is that he has the talent; I mean he's quick. I hope he can be clever as well, to learn everything from Formula One. There's a lot that be will learn and I hope he's quick enough to learn and to be consistent in Formula One and that he can stay, not just staying for one or two years and not doing what he's supposed to do. Until now he shows great talent and I hope he can show the same in Formula One, so I'm happy.

Nico, your thoughts?
Nico Rosberg: The same as Felipe said. All the journalists are always asking ‘is it only with money that you can get to the sport?' and things like that. It's great to see that if you have the talent and you really deserve it… there have been many examples recently that have made it into F1. That's important, that's good. Of course, it's very young but I think we'll be OK.

Daniel, your thoughts on this?
Daniel Ricciardo: Not much more to add. It makes me feel a bit old! Definitely the Red Bull Junior Team and the programme for me worked a treat; helped me get to where I am. Obviously it's good they're now helping out Max. Obviously the age is the question mark but the talent, as Felipe said, is there. It's going to be interesting but, yeah, it's good.

Romain, what about you? Like the three guys before you, you all started in your 20s, what about starting so young in Formula One?
Romain Grosjean: It's a wonderful opportunity that he has and it's something quite special to come to Formula One. As everyone says, he has shown great talent early in his career but he will have a lot of homework to do to learn everything about racing in higher categories - tyre deg, speed, a lot of things. But it's good to see fresh blood, but a bit sad for JEV.

Jules?
Jules Bianchi: Obviously as everyone says it's a great opportunity for him and it's great that some teams still invest in young drivers like that. I'm sure he will be doing well. He's really quick; we saw that in Formula 3. He won everything in go-karts. I'm also sad for JEV, I hope he will find something else but this is how it is now.

And Daniil, you'll be driving alongside him next year, you started at 19 this year, what are your thoughts?
Daniil Kvyat: Yeah well, I think we will see how it is going to be. I think we're going to be team-mates. I think it's not as complicated as it looks to all of you. For the rest you just come and see what you can achieve. For every driver it's the same. It's not my job to analyse all the things deeply and so we will just wait and see.

What's not as complicated as it looks?
DK: I think any driver can come to Formula One, can adapt, can get up to speed. I think everybody is coming to Formula One for some reason - because he has talent, because he has been successful somewhere; there is always a reason why someone comes to Formula One but then there are many different things that make the difference, so it's as simple as that.

Jules coming to you. Two classic tracks coming up: Spa and Monza the next two races. One of your relatives is in a photograph over here, driving a Ferrari from the past. But what are your feelings on racing here and the prospects for you and the team and are they pushing hard do you feel?
JB: It's special for me to be in Belgium and here in Spa because of my family; my great uncle won here in GT cars and I feel a bit like being at home again, so I'm good here, I'm happy. We're trying to push hard with the team, trying to stay ahead of Caterham. This is still our target, so we'll try to achieve that. For sure, it won't be easy because they are pushing hard as well. They are not giving up. That's why we will keep fighting. We will have to see how it will be in Spa. Monza will be another challenge but at the moment I'm focused on this race.

Romain, you said you're reviewing you options for 2015. Obviously Lotus have secured Mercedes engines for next year. What are the next steps for you and the team?
RG: I think we still have to understand and analyse a bit more this difficult season. There were many reasons why we started on the back foot but I'm sure we can still learn a lot. The idea is to prepare the future as good as it can be for Lotus. They have been designing wonderful cars in the last two to four years and I don't see reason that it's not the case again in the future. Hopefully things get better but so far we still need to do our job, understand things and what we can learn from that difficult season.

Daniil, coming to you. As this Daniel was saying, just picking up on his points from earlier on, you know with the Toro Rosso programme you've got around about two years to prove yourself and obviously in Jean-Eric's he moves on. Tell us, when you're in that situation, does it feel reassuring to know that you've got those two years, you've got that time to prove yourself or does it add to the pressure?
DK: It all depends on how you take it. Obviously you can take it from two sides. Obviously you have to think that you've been given the chance and you just try to use it as good as you can. You cannot really be thinking too much about there is some limited time about it, but yeah, so I've been given a chance and I'm just doing my best all of the time, trying to make the best out of it. There's no special trick.