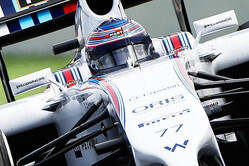 Valtteri Bottas finished seventh, while Felipe Massa retired on the last lap. Both cars ran in the top five early on, challenging for the podium places. Valtteri suffered with high brake and engine temperatures, preventing him finishing higher than seventh. Felipe was attacking Perez for fourth on the final lap when Perez crashed into him. Felipe was taken to hospital for precautionary checks, the results of which were entirely positive and he has therefore been discharged.

Valtteri Bottas: Not our day really. The beginning of the race was ok but Red Bull was a little bit stronger than expected, so we were looking to fight for fourth position. We need to look back at the second pitstop in terms of timing and the stop because I didn't come back out where I should have. I was then in traffic, stuck behind the Force India, which overheated the engine and brakes, and I had to save everything to get to the flag.

Felipe Massa: I was one of the quickest guys on the track, so we lost many points today. I'm happy that I'm here with no problems but I'm so disappointed for what happened with Perez, and also for the pitstop because I think maybe we could even have fought for victory today. But it shows we have a good car and I'm convinced the next race will be better.

Rob Smedley, Head of Performance Engineering: It's massively disappointing to lose that position with Felipe at the end. It looked like he was going to get past Perez and they've had a collision. Valtteri's race was going well but we were a little bit hot, having to manage engine and brake temperatures, as a lot of other cars were. That dropped him to ninth, which was recovered to seventh with Felipe's accident. In free air the car was very quick, but we've lost a lot of points that we should have picked up today.