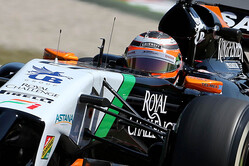 Sahara Force India had a starring role in the Canadian Grand Prix as Sergio Perez challenged for victory until the closing laps of the race. Sadly he was the innocent victim of a high-speed crash on the final lap (after contact with Felipe Massa). After medical checks at Sacre Coeur hospital in Montreal, he was discharged. Teammate Nico Hulkenberg's one-stop strategy saw him finish in fifth place scoring a further ten points for the team.

Nico Hulkenberg: "It has been a very busy race for me today, so to come away with ten points and a fifth place is a good result. I gained some positions at the end due to the crash between Sergio and Massa but lost one to Jenson [Button] when I was in a battle with Alonso, but we were always going to finish in the points regardless. The safety car at the start didn't help me as it allowed those on supersoft tyres to stretch their stints. Being on a different strategy from everyone else meant I always had someone pushing close behind me: it was fun, but also very challenging, especially towards the end of the race as I had quite a long stint on the supersoft tyres. Stopping only once I had a bigger challenge managing the tyres compared to the two-stoppers, but I think we got the right reward for it. I think it was the fastest strategy for us today and to be the only two cars to manage a one-stopper is definitely a positive."

Sergio Perez: "On the final lap I was defending my position going into turn one when I suddenly got hit from behind. It was a big impact, but I am okay. I'm really sad for the team because we had an amazing race today and the one-stop strategy was working perfectly. It was not easy in the final laps and I was pushing hard to try and get ahead of Nico [Rosberg] for the lead. Daniel [Ricciardo] managed to get ahead of me when I had an electrical issue with my car, but I managed to reset the system for the final couple of laps. The podium was possible today and I'm just very disappointed for the points we have lost."

Robert Fernley, Deputy Team Principal: "The most important thing today is that Checo is okay after that very heavy impact on the final lap. He had done a fantastic race, challenging for the lead for a large part of the afternoon and holding on to what was shaping up to be a very strong result. Unfortunately, this was not to be, but we will focus on the positives and build on the performance we showed today at the coming races. Nico delivered another very solid performance, making the most of an alternative one-stop strategy. He drove smartly to resist incredible pressure towards the end of the race and was able to bring home another good haul of points. As in previous rounds, our pace looked really strong in the race and we are confident we will be translating it into another good performance in Austria."