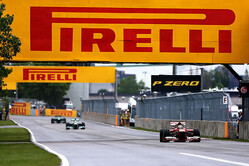 Just as was the case for Monaco, the Pirelli P Zero Yellow soft and P Zero Red supersoft tyres have been nominated for the Circuit Gilles Villeneuve: a semi-permanent facility, which combines bespoke sections of track with normal park roads. But Montreal is a very different proposition to Monaco, with much higher average speeds, frequently changeable weather conditions, and a low-grip surface that often catches out even the most experienced drivers - many of whom have had contact with the famous 'wall of champions' in the past. Other important factors affecting the tyres in Montreal include braking, with heat from the brakes warming up the tyres (although this year, the behaviour of the brakes is different, with the new brake by wire system). There are also some notable kerbs in Montreal, which force the tyre to absorb impacts as part of the car's suspension.

Paul Hembery: "We're expecting the tyres to be worked a lot harder in Canada than they were in Monaco, with a lot more energy and greater forces going through them due to much higher speeds. This should lead to the maximum possible mechanical grip, which is certainly what's needed in Montreal. There's a high degree of track evolution and we frequently see a lot of sliding - especially with reduced downforce this year - which obviously puts an increased amount of stress on the tyre. But we are still expecting to have contained wear and degradation this weekend, even on the two softest tyres in the range. Canada always tends to be an unpredictable race where strategy can make a real difference, also because of the high probability of safety cars. As we saw in Monaco, taking the right strategy opportunities when they present themselves under unusual circumstances is a key element to success at any circuit that falls outside the usual mould, with Canada being a prime example. Historically, there's a reasonable chance of rain, in which case judging the crossover points - sometimes without previous data, if each previous session has been dry - becomes crucial."

Jean Alesi, Pirelli consultant: "Montreal is quite a special and unusual circuit, with high speeds and an interesting mix of a street circuit and a permanent track. From a driver's perspective, the most important thing is to maintain the rear tyres in the best possible condition. There aren't really any long corners, so the stress on the tyres in Canada is primarily longitudinal, under acceleration and braking. You have to be very careful getting on the power, otherwise you can wear out the tyres and then braking becomes very difficult too. It's not a physically demanding track for the driver but it demands utmost concentration under braking, especially at the chicane before the pits, where the famous 'wall of champions' is waiting. Personally, I'll always remember Canada for my win in 1995: it was my only F1 win, on my birthday, and with the legendary number 27 on the car, just like Gilles Villeneuve. The emotion was unbelievable."

The circuit from a tyre point of view:

Traction and braking are the two key points that affect tyres in Montreal, with the increased torque and diminished downforce of the 2014 cars making the track even harder to master this year. The biggest risk is wheelspin, with the action of the tyres against the track overheating the tread. Late braking can cause flat-spotting if a wheel locks up - however, the design of the 2014 tyres have made them a lot more resistant to this phenomenon.

The cars tend to run a low downforce set-up in Montreal, to maximise a top speed of over 300kph on the straights. The trade-off for this is less aerodynamic grip through corners, meaning that the cars slide more and are more reliant on mechanical grip from the tyre compound to get round the corner.

The supersoft tyre is a low working range compound, capable of achieving optimal performance even at low temperatures. The soft tyre is a high working range compound, suitable for higher temperatures and more strenuous track conditions. The weather in Canada can be variable, often causing the race to be interrupted. The 2011 Canadian Grand Prix, Pirelli's first race in Canada of the current era, was also the longest in Formula One history, due to repeated stoppages.

One of the biggest challenges for the tyres in Canada is the fact that the asphalt is extremely inconsistent, made up of a number of different surfaces that offer variable levels of grip. The job of the tyre compound is to smooth out these differences to offer as consistent a level of grip as possible.

Sebastian Vettel won for Red Bull last year, having qualified on pole. He claimed victory with a two-stop strategy (supersoft-medium-medium) having used the intermediate tyre in a wet qualifying session. While Pirelli is nominating the soft rather than the medium tyre alongside the supersoft this year, all the 2014 compounds are slightly harder than their predecessors.