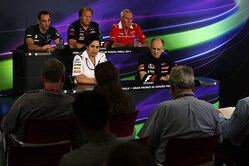 A question to all of you to start with. What updates did you try on the car today? Obviously it's always a talking point at the first European round. How did they perform and will they stay on the car for the rest of the weekend?
Cyril Abiteboul: Yeah, well, like every year and like most of the teams we brought an aerodynamic package, a typical race five, Barcelona package: front and rear, front wing, rear wing, floor and so on and so forth. Will we keep them? It's sad to say that through the lap time it's not working great. Will we keep them - I hope, because we don't really have an alternative. So the plan is really to make them work at that point in time.

Franz?
Franz Tost: A new rear wing, new rear wing endplates, a new diffuser and they will stay on the car during the race weekend.

OK. Robert?
Robert Fernley: Mainly floor but it's complementing a little bit what we did in China to finish off the package and they'll be staying on the car.

Monisha?
Monisha Kaltenborn: We have a new front wing, we have new sidepod deflectors, we have a new cooling system, all that aimed at reducing the weight of the car a little.

Will they stay on the car?
MK: They will stay for the weekend, yes.

And John?
John Booth: Yeah, we have a few small trims and gurneys but nothing major this weekend, but we're very pleased with what we've added and for sure they will be staying on.

Another question for all of you: obviously there were meetings last week on cost control - all the teams met and also the F1 Strategy Group met, so I'd like to ask all of you what you think of the progress so far, thoughts on next steps and the likelihood of a workable plan for 2015 as we stand here. Cyril?
CA: It was a good meeting; it's always good to meet, in particular when there is an opportunity for all teams to be represented. It was certainly that opportunity. So, yeah, we put on the table our position. When I say 'our', it's the position of the teams that are not in the Strategy Group and they are afforded less opportunity to make their position. So yeah, pretty much pleased to have that opportunity. Obviously an awful lot of work remains but pleased with that.

Franz?
FT: Yeah it was a good meeting, as Cyril already mentioned. The most important thing now is to find solutions how to reduce the costs. I think we are in a good way. I hope that at the end we will find possibilities to come down with the costs and to help the smaller teams to survive.

Robert?
RF: Yeah, I think it was a very good meeting; very positive. I think we shouldn't lose sight though of the fact that in Geneva we agreed a certain protocol in terms of unanimous agreement to look at cost cap and we believe that still applies today and that the FIA should continue that process.

Monisha?
MK: I pretty much agree with what Bob said. We could sense that there is an overall feeling to reduce costs significantly but now it's time that we really had concrete steps and of course there are different positions on the table but it's important that we find a solution now and implement it.

And John?
JB: Yeah, we support any moves that lead towards the ultimate goal of getting the costs under control. Last week's meeting was really a carry-on from Geneva in January. I think all teams are working hard to find the best way forward.