Hamilton continues to dominate in Spain 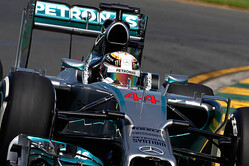 The big news is that following the electrical issue which sidelined him after just four laps this morning, Sebastian Vettel will take no further part in today's activity, his team needing to replace the wiring loom damaged earlier.

To add to the German's frustration, while teammate Daniel Ricciardo was able to finish third quickest this morning he was 0.950s off pace-setter Lewis Hamilton's time, the Mercedes driver clearly having a lot more in reserve.

On a circuit as demanding, in terms of downforce, it was a good result for McLaren, whilst Giedo Van der Garde will be keen to get out of his overall following a brake failure.

Having given over their cars to the reserves earlier, Valtteri Bottas and Esteban Gutierrez are back on duty his afternoon.

The lights go green and Ericsson leads the way, followed by Romain Grosjean. In the McLaren garage Ron Dennis watches the final preparations to Magnussen's car.

Rosberg, who missed much of the morning session doe to an ERC cooling issue is in his car, his crew having worked throughout the break.

Ericsson gets things underway with a 39.717 before Grosjean posts a far more sensible 30.574.

"We have an engine problem," Chilton is told, "we need to come in slow, no full throttle." The English youngster duly obeys.

Maldonado goes quickest (29.275) ahead of Kvyat, Grosjean, Gutierrez and Bianchi.

No sooner has Magnussen gone quickest with a 28.815 than teammate Button posts 28.703. Elsewhere, the Mercedes duo head down the pitlane.

A 27.644 sees Ricciardo go quickest however, moments later Hamilton crosses the line at 27.448.

As Hamilton improves to 27.061, almost half-a-second quicker than Ricciardo, Bottas is seen wasting time and energy in the final chicane.

Watched by Luca di Montezemolo, Rosberg goes second (27.522), ahead of Ricciardo, Alonso and Raikkonen, both Ferraris over one second off Hamilton's pace.

As Sutil sits at the back of the Sauber garage chatting with Giedo Van Der Garde, Alonso is shown still really wrestling with the Ferrari.

Twenty-five minutes into the session Maldonado and Ericsson are the first to switch to the option (medium) rubber. Despite almost tripping up over the Caterham, the Lotus driver subsequently improves to fourth with a 27.866.

Once again Chilton is told of a problem with his car, the youngster told not to use full throttle.