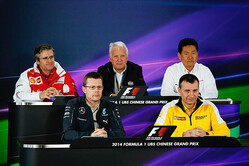 If we can start with you Charlie? The new power units have excited a lot of debate since the beginning of the year. Will you once again briefly take us through the philosophy behind this technology and why F1 believes it was the right time to introduce it?
Charlie Whiting: I think it was fairly clear, we're going back a little while now, that Formula One, being the foremost single seat category, should be at the forefront of technology. I think bit was also clear at the time that the motor manufacturers were also looking towards conservation. So we felt we had to go that way. I think to ignore that would have been rather silly. I think we would have possibly lost some manufacturers and certainly deterred others from coming in.

I guess efficiency plays a part in that as well?
CW: Of course that was the major goal. We started four years ago with the engine manufacturers. We had quite big meeting with lots of them assembled in Paris. It was the 27th of April, in fact, in 2010. We assembled them all together and the initial goal was to have a 50 per cent increase in efficiency but over a period of time that became diluted somewhat because it appeared that was rather ambitious for the start of this new engine era. So we ended up with what we have now and that is an engine that everyone can see is about 35 per cent more efficient than the previous engines.

So, Andy Cowell, does that represent a small step in the right direction or a giant leap?
Andy Cowell: It represents a giant leap - going from internal combustion engines, naturally aspirated at about 30 per cent thermal efficiency up to engines where we're all targeting 40 per cent thermal efficiency is a huge step, a huge introduction of new technology both on the internal combustion engine for efficiency and also on the two energy recovery systems that we've got on the power unit.

What do Mercedes expect to get from this project in terms of technology that can be eventually transferred to the road? Is that a long way in the future or is it already happening?
AC: It's already happening. The regulations were specifically written to take some of the ideas are already in the road car world, so downsizing, downspeeding and turbocharging but adding some new, interesting technologies in there such as the electric turbocharger as a specific example and those sort of projects are already being worked on.

Can I ask the same question of Rob White. What does Renault expect to get from this project in terms of road cars.
Rob White: It's a big leap, as Andy says. I share the remarks that transfers are already happening. The transfers are not only specific technologies, the e-turbo being one of them, but also the fundamental alignment of the mission we have. Our challenge now is to race, to go as fast as we can with the given fuel allocation, which is a very, very similar mission to our road car colleagues who have to use the smallest amount of fuel to get a given mission done and that's extremely close.

There's been quite a lot of talk about how the power units are contributing to racing and we've heard some unusual suggestions for things might be changed. Firstly, do you think there are problems with the racing this year? Secondly, what do you think of ideas such as shortening races, raising fuel limits etc. Do those suggestions miss the point?
RW: The main problem I see so far is that Andy has won rather more than I'd like and we have win less than I'd like. The specific suggestions are just shifting the goalposts rather than doing anything fundamental and I think as Charlie indicated the basic parameters that we're now racing with were decided well upstream in sufficient time that we knew what to do with them. I honestly feel that the numbers were well judged and I think the 100kg/h fuel limit and the 100kg for the race, as well as having the benefit of being nice round numbers, also play out more or less as predicted in terms of the level of performance and the level of fuel saving needed to get to the end of the race. I think we've seen in the early races that there hasn't been an excessive amount of fuel saving that would perhaps have damaged the show. I think we've seen more recently, particularly in Bahrain... We all enjoyed the race there, it was the first one I saw from the comfort of my living room and it was certainly an exciting one to watch.

Now we've heard from two of the manufacturers currently involved in F1 but let's get the thoughts of a manufacturer that will next year return to the sport after six seasons away? Thank you very much Mr Arai for coming to our press conference. What is it in the new regulations that has encouraged Honda to come back into Formula One at this time?
Yasuhisa Arai: Thank you very much. I am delighted to be here and to be given this opportunity by the FIA to speak at this conference. As you mentioned we will return in the year 2015 for the Formula One. One of the major reasons for our decision was the new regulation introduced this year and that the various environment... I mean green technologies in the new Formula One power unit, as well as the total energy management are both very challenging and significant. The new regulation encourages each power unit supplier to pursue the ultimate combustions efficiency and high pressure direct injections, such as many, many new technology. Thus the challenge is to convert each unit of gasoline into energy and this is expected to be reflected on the huge production mode. That's the reason why.

You're setting up a new base at Milton Keynes in the United Kingdom. What will that facility be responsible for in the coming years?
YA: That, we will open June this year. Now still under construction but that factory is to do the engine maintenance for the races and rebuilding the Formula One engine and also to go to the race-track for the trackside service. That's Milton Keynes.