Rosberg and Hamilton to talk 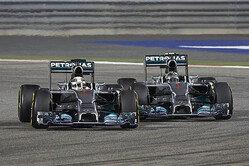 Nico Rosberg has revealed that he and teammate Lewis Hamilton are to talk amidst fears their in-team battle could develop into all-out war.

Whilst Rosberg dominated in Australia, Malaysia was all about Lewis. Then came Bahrain where the German took pole but his teammate won a hard fought race described by many as one of the most exhilarating of recent times.

As fans were kept on the edge of their seats, and Paddy Lowe attempted to defuse the situation whilst still allowing them to race, at one stage the German was heard to shout "that's not on".

Whilst the team and fans want to see the in-team battle continue, Rosberg admits that amidst fears it could eventually develop into something else the pair will sit down and discuss the situation.

"It was an enjoyable fight, during the race anyway," the German told reporters in Shanghai ahead of this weekend's Grand Prix.

Asked about talk of a 'clear the air' meeting with his teammate, Rosberg said: "It's completely normal that, as a team, when there are races when a lot has happened that you're going to go and sit down and discuss it.

"There have been so many occasions, even when we were twelve or thirteen years old," he continued. "And there have been 'intense' discussions. But we have always moved on afterwards with the necessary respect.

"Bahrain is completely gone and I'm fully focused," he added. "I know I can win here and that is a huge elevator. I know that it (the fight) is most likely against Lewis and that is where my head is right now."

Speaking at the official FIA press conference, Hamilton admitted that the Bahrain scrap was more akin to karting than F1.

"It was a bit more like a go-kart race," he told reporters. "Whether or not it will always be like that... that was a great race, I hope there are more races like that through the year.

"You don't see it too often," he added. "Obviously in karting you don't have downforce, you just have mechanical grip, so it is more exciting in general. But to have the staggered tyres, difference between different cars enabling that racing in the last race was quite unique."

Meanwhile, as sections of the media, facing a two-horse race, certainly in the early stages of the season, attempt to stir the pot, Rosberg played down claims that the team handed him data relating to Hamilton's Sepang performance ahead of the Bahrain round.

"It's completely natural to review a race and it's not any different now," said the German. "Again, I've reviewed Bahrain, tried to learn from it, pick out the good bits, try to work out what I can do better. It's always the same and just before Malaysia there wasn't the same opportunity because I was the only one in the race at Melbourne."