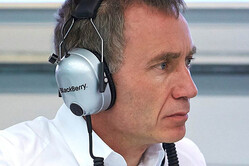 Bob Bell, who joined Mercedes from Renault in 2011, is to leave the world championship leaders at the end of November.

In a brief statement, the Brackley based outfit said:

"Bob resigned his position in December 2013 and will leave the team at the end of November 2014, with the intention of pursuing new challenges outside the company. He has held the position of Technical Director since April 2011.

Moving forward, the team will streamline its technical organisation and Executive Director (Technical) Paddy Lowe will assume the responsibilities previously held by Bob.

The role of Technical Director will not be replaced."

Bell's career began with McLaren in 1982 where progressed from the role of Company Aerodynamicist to Head of Research and Development in 1988. In 1990 he was appointed Project Technical Director for the MAVerick Land Speed Record Vehicle moving on to the role of Future Projects Manager at McLaren International in 1995.

In 1997 he joined Benetton as Senior Aerodynamicist before joining Jordan as Head of Vehicle Technology in 1999.

In 2011 he headed off to Brackley as Technical Director, seemingly the first of many such appointments by the German team.