Red Bull and McLaren in legal spat over Head of Aerodynamics 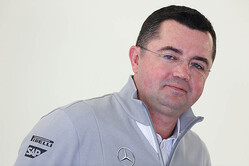 Hours after Red Bull announced Dan Fallows as its new Head of Aerodynamics, McLaren claims that it has a contract with the Englishman.

In its statement issued earlier this morning, Red Bull said that Fallows, who had previously worked with the Austrian outfit as Team Leader (Aerodynamics), but had left "for a short time last year" had now returned to Milton Keynes to begin working in his new role.

However, speaking in the latest McLaren Mercedes online interview this morning, team boss Eric Boullier suggested that the announcement was somewhat premature.

"Dan Fallows has a legally binding contract with McLaren and the matter is now in the hands of our lawyers," he said.

In January, McLaren Managing Director, Jonathan Neale announced that the team had signed Fallows along with Peter Prodromou (both from Red Bull), Ettore Griffini and Ciaron Pilbeam from Lotus, and more than a dozen other top-level engineers.

Prodromou, who agreed a move back to Woking last year, which was initially denied by Red Bull, has to wait until the end of 2014 before he can join McLaren in a similar role.

As is so often the case in F1, the results are decided by the lawyers.