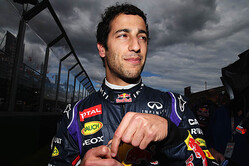 The company which manufactures the fuel flow meters for Formula One, whose accuracy has been cast into doubt by Red Bull, says it has the full backing of the FIA.

In the wake of the row which saw Daniel Ricciardo disqualified from Sunday's season opener for fuel system irregularities, Red Bull claimed the meter provided was inaccurate and unreliable.

However in a statement issued by the Gill Sensors, the manufacturer of the meter, today, the Lymington-based company insisted it has the full support of the FIA.

"Following the Australian Grand Prix last weekend, the FIA have provided Gill Sensors with positive feedback on the performance of the Fuel Flow Meter, confirming their confidence in the development and stating the meters meet the FIA’s accuracy specification.

The meter development included an extensive testing programme, which involved liaising with many of the F1 teams for their valuable feedback on meter design and functionality. Meter calibration is handled by the FIA’s third party calibration company.

The meters utilise ultrasonic technology which was selected for its resilience in extreme operating conditions. The FIA chose Gill Sensors for this complex development because of Gill’s 29 years of proven experience in Ultrasonics."

In its defence, Red Bull claimed the meter had been unreliable all weekend, team boss Christian Horner insisting that other teams had encountered problems.

The FIA subsequently claimed that during the race the team had been warned that the fuel flow on Ricciardo's car was too high but the Austrian outfit carried on regardless.

In their ruling, the stewards in Melbourne said that; "regardless of the team's assertion that the sensor was at fault, it is not within their discretion to run a different fuel flow measurement method without the permission of the FIA".

Since then Mercedes and Ferrari have both thrown their support behind the FIA... rather than siding with the team which has won both titles for the last four years and went to Melbourne very much on the back foot.

"The FIA is obviously controlling fuel flow and checking with all the teams, and it is a question of learning by doing it between the FIA and the teams," said Toto Wolff, according to the Guardian. "The fuel-flow meter is an FIA system and this needs to be integrated in the cars. This is a learning process where the teams support the FIA and vice versa."

"We need to rely on the fact that it is a situation that is well managed by the FIA," added Stefano Domenicali. "We have the FIA that will do their job and I am sure there will not be a problem at all."