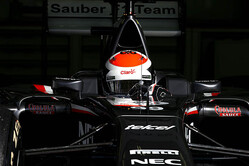 It was a spectacular qualifying to the Australian Grand Prix with an unexpected outcome. After Sauber F1 Team driver Esteban Gutierrez missed out on the third free practice, because of a gearbox change, he qualified P19 and, in addition, receives a grid penalty. Adrian Sutil was satisfied that qualifying went without any problems and is happy with P14 for the moment.

Esteban Gutierrez: "It was a nightmare with the traffic. Obviously, we started a bit late into the session due to the issues we had. I want to thank my mechanics because they did a great job putting the car together for qualifying. In the first lap, we were completely out of phase to the other cars and it was not the best situation that I had to overtake around four cars on this lap. In the second lap I had traffic in the first corner and this was not ideal. Regarding the race, we just need to look into the reliability and this is the main topic at the moment. Therefore we try to focus on that. The good thing is that Adrian's car is in good shape today and this indicates we can fight for something."

Adrian Sutil: "We had a difficult weekend as did many others. The car is not where we want it to be yet, but I am quite satisfied we were able to run without any problems during qualifying and that we made it into Q2. The yellow flag at the end didn't help, I think I could have pushed to get even more out of the car. But I think P14 is solid for today and I will definitely get the most out of the car tomorrow to improve that position."

Monisha Kaltenborn, Team Principal: "Overall it was a spectacular qualifying to the Australian Grand Prix in Melbourne, with an outcome that might have surprised a lot of people. We knew it would be difficult for us. Esteban lost a lot of time in the first practice session yesterday and today again the whole of FP3. That was obviously not ideal, as every lap is very valuable in this early phase of the season in order to gain as much experience with the new car as possible. Adrian got everything out of the car that was possible. From where we are, tomorrow will be challenging, because we know we are not where we want to be in terms of our performance. Our aim is to maximise our opportunities in the race tomorrow."

Giampaolo Dall'Ara, Head of Track Engineering: "A difficult qualifying for our team. Esteban lost the whole of FP3 because we had to change the gearbox on his car, and then in Q1 we let him out a little bit too late, which put him into traffic. Therefore he didn't have a real chance to succeed. Adrian is more or less where he could be today. In the race a lot will be possible, because sheer speed is one thing, but the weather might play a role and reliability can be a big issue. For sure the possibility of points is there. We will try to get the most out of our position."