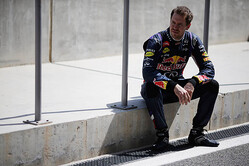 Whilst Williams reached new heights in Bahrain today, Felipe Massa posting the quickest time to date, Sebastian Vettel and Red Bull hit an all-time low. The world champion could only manage four corners before his car ground to a halt, a subsequent run seeing him failing to even get to the end of the pitlane before stopping.

As team boss Christian Horner admitted that his team is ten days behind schedule, rivals upped the pressure with Williams leading the way.

Following one of its worst seasons in living memory, the Grove outfit goes from strength to strength, invigorated by the arrival of Felipe Massa, Mercedes power, shrewd sponsorship deals and some savvy signings to its technical department. The FW36 not only has pace it has reliability, something rivals, including Red Bull and Lotus, can only dream of at this stage.

After two relatively disappointing days, Mercedes was back on form again with Nico Rosberg completing 103 laps on his way to posting a best time just 0.226s shy of Massa's. Though the German outfit's day was not entirely trouble-free, the team opting for a cautionary engine change which meant it was side-lined for the first three hours of the session.

Kimi Raikkonen and Kevin Magnussen were both over 2s off the pace, despite healthy mileage, which included race distances in the afternoon, while Force India continues to impress.

It was another strong day for Marussia, Jules Bianchi around a second quicker than Caterham's Marcus Ericsson, while Sauber's Adrian Sutil, like Vettel, failed to complete a single lap. After two days on which Pastor Maldonado was unable to exceed more than 31 laps, Romain Grosjean was at least able to go two laps better, the Frenchman completing 33. Plagued by numerous problems over the first couple of days, including two fires, one down to a new exhaust system, the other to the power unit, today's issue is thought to have centred on the motor generator unit kinetic.

"We had a very good day today doing almost 100 laps," said Massa, who focussed on aero evaluations, set-up work and qualifying simulation over the course of the day. "We did a lot more performance work in the car which is something that we haven't done so much of so far.

"I'm really happy with the car and feel we found a good balance," he continued. "We did so much work on the set-up but it is very important that we go to Australia prepared. Of course you are always happy when you see your name at the top in first place, but as well as performance, today was good for the mileage and reliability of the car which we know is needed for Australia.

"You can never be sure that you are 100% ready for the first race, but I feel that what we have done in these days testing has been important for making sure that we have a car that can not only get to the end of the race, but that will have good performance as well."

"Having covered most of the bases in terms of reliability, we concentrated more on performance today as we had planned to do," added Chief Test & Support Engineer, Rod Nelson. "As we don't get the opportunity to test very much on a race weekend, we really look to do some significant tests when we have the tyres available to do so and we did some pretty positive tests today to continue learning about the car. This afternoon we did a full qualifying simulation with Felipe and we are pleased with how that turned out, so it's been a good day for us."

At Mercedes, running was delayed during the morning after overnight inspection of high-mileage components led to a precautionary engine change for the F1 W05. Nico Rosberg emerged for his first run at 12:00, completing 22 laps in the remaining hour before the lunch break. A further 81 laps followed in the afternoon as part of a programme including setup evaluation, long runs and qualifying simulations.

"That was an incredible effort by the team and I'm really happy with our day's work," said Rosberg. "The night shift crew recognised a strange sound from the engine while working on it during the night so we had to change it, which took a good few hours and meant we missed out on running for most of the morning. In the end I managed to do over 100 laps, so this was a very useful final day of testing for me and I learned a lot in the process. The only problem was the conditions, with a lot of wind and blowing sand at some corners meaning that suddenly you could have almost no grip which was a bit difficult to manage.

"Overall I can be really happy about my testing programme, so a big thanks to everyone in the team both here and back at the two factories for the remarkable job they've done. As is the case for everybody, we still have a few reliability problems that definitely need to be sorted out before Australia, but in general I think the winter tests have been better than expected. After some work in the simulator next week I will fly to Melbourne on Friday, and I can't wait to be back in the car again.

"We didn't have the best start to the day," admitted Paddy Lowe. "Having discovered an engine problem at 04:00 this morning we weren't able to get out on track until 12:00, which forced us to alter our schedule quite significantly. However, we ended the session in a great position having exceeded 100 laps in a single day for the first time during pre-season testing this year; a landmark which had proven to be a bit of an obstacle up to that point.

"After the delayed start it was a relatively trouble-free day. Nico completed setup evaluation work over the course of some fairly long stints, before ending the afternoon with a pair of short runs on the super soft tyre. The team did a great job working through the night to get the car back on track before lunch, and it was good for Nico to round off his pre-season with a good day's running before he heads to Melbourne. We'll be targeting the same for Lewis tomorrow."