Perez quickest again on a fiery day for Renault runners 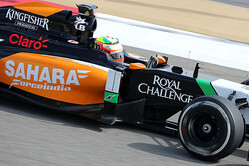 For the second successive day, Sergio Perez and Force India topped the timesheets in Bahrain, while Red Bull also made "significant progress".

The Mexican was quick from the outset, while reliability - having completed 213 laps in two days - also appears not to be an issue.

In ideal conditions the eleven drivers on duty completed 868 laps, over 100 more than yesterday, some of them at the wheel for the last time before Melbourne.

While Red Bull has made obvious progress, Daniel Ricciardo closing to within 0.173s of Perez' time, it is clear that the Renault powered tears are still hurting. His car, still suffering overheating issues, Ricciardo concentrated on short runs, especially in the morning, his pit crew always ready with a fire extinguisher to hand, whilst at Caterham Marcus Ericsson's day came to an early end when the Swede's car stopped on track (T4) following a small fire.

Like Ericsson, Pastor Maldonado also suffered a small fire, to his Lotus, this, together with a number of other issues, including software problems, restricting his running to just 31 laps. The other Renault runner, Jean-Eric Vergne at Toro Rosso, completed a promising 61 laps but was over 4s off the pace.

The Mercedes teams continue to impress though, for the second day, the works team lost track time. Following the unspecified problem that hampered Nico Rosberg yesterday, today Lewis Hamilton had his track time compromised by a gearbox issue which resulted in an early bath.

Ferrari continues to impress with Fernando Alonso completing an impressive 122 laps on his way to posting a best time just 0.064s shy of Perez while at Williams the Spaniard's former teammate, Felipe Massa, finished fourth quickest with a further 103 laps to the team's tally.

The Brazilian was one of several drivers to complete a race distance today, while Hamilton, Jenson Button, Maldonado and Ericsson were the cause of the four red flag periods.

"It feels very good to have another full day and to do so many laps," said Perez, who now hands over to teammate Nico Hulkenberg for the final two days of the test. "It's my last time in the car until we arrive in Melbourne and I'm feeling positive about how things are going. The set-up work today was very useful because we tried some different things to have a better direction for the first race. Everything went to plan and we managed to complete all the long runs in the afternoon."

"It has been another busy day with lots of miles completed and a great deal learned," added Technical Director, Andrew Green. "The programme this morning involved assessing a different set-up direction compared to yesterday, which will help in our decision-making going into Melbourne. After lunch we switched to extended runs using several of the tyres compounds available to us. It's been important for Sergio to have two solid days in the car to get him more comfortable with the VJM07 and race-ready for Melbourne."

This morning, Alonso continued with development work on the F14 T, trying various changes to the set-up and running a comparison of some aerodynamic parts. In the afternoon, he completed a race simulation with live pit-stops.

"Six hundred kilometres are always welcome," he said, "but it's still too early to say we are a hundred percent ready for Melbourne. We still have a lot to learn, but I am happy with the way the day went. In the morning, we did some set-up work which taught us what was the best direction to go in, while in the afternoon, we managed to complete a race simulation and every lap we did can be added to the learning phase, which is the normal situation to be in during winter testing.

"On the performance front, it's still difficult to have a clear idea of what our rivals are up to," he admitted, "and I think we will only find that out in Australia."

Ricciardo recorded 66 largely trouble-free laps, the team's highest mileage of the year, as his team conduct a number of background tests and aerodynamic evaluations as well as some pit stop practice.

"It went a lot better today," said the Australian. "This morning it was important to have the race crew here to do the pit stops, as they haven't had the chance to get to grips with the car yet, so we didn't do that many laps in the morning. However, in the afternoon we did some good stuff. We had a go on the soft tyre, which was nice, to see how the car responds with a bit more grip. We also did one long run at the end, which was very important, just to see how the car is behaving with the tyres. A big improvement everywhere over yesterday and a much more optimistic outlook now I think. We still have a lot to learn and understand, but we're making progress and the past two days have been a big step in the right direction."

"A very much better day's work for us today," added Race Engineering Co-ordinator, Andy Damerum. "We were a bit late out in the morning, but that was simply due to the repairs we had to make overnight because of the damage we had yesterday. That was pretty much a 'fix in the field'. When we did send Daniel out this morning we again put him on short runs just to test everything, as obviously you don't want to push too hard, have a problem and then wreck the rest of the day. That cautious approach also allowed us to do some pit stop practice, which we haven't done as yet and also to do some aero work on the car. That sort of thing is always going on in the background but I suppose today was the first time it has been visible. We were back in the garage over lunch to make some changes, though nothing drastic, and then in the afternoon we were very much better again. Daniel was able to do a longer run of 20 timed laps, our longest so far.

"The car is still difficult to drive for Daniel but we'll tune that out," he continued. We have more parts to fit overnight and hopefully we'll be able to get some more decent runs in with Sebastian over the next two days and also give him the opportunity to do some performance runs. Overall a good day today and very encouraging."