Hamilton: It looks fantastic, so aggressive

For the new season, Mercedes is the only top team on the grid with the advantage of continuity in its driver line-up. Lewis Hamilton and Nico Rosberg have spent the winter break preparing for the year's new challenges, working closely with their respective engineering teams and conducting intensive training programmes.

"It has been exciting to see the car come together and to see - and hear - it run for the first time last Friday in Silverstone," said Hamilton. "It looks just fantastic, so aggressive but full of really nice details as well. I am excited to find out how the new Power Unit feels to drive, to hear how it sounds from the cockpit and to compare the job we have done relative to the competition. I think this is probably the season with the most unknowns that I have faced in my career and that's just so exciting for all of us. 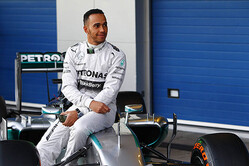 "This is my second season with Mercedes and it now feels like I am a fully-fledged member of the team and that we are nurturing the great relationship we built last year. But it is still going to be a big learning year for all of us. There is so much new technology on these cars and so much information to take in and filter out to get down to what really matters, it's going to be a big challenge with changes to driving style and race strategies, too.

"It has probably been the shortest winter I have ever had out of the car. I spent Christmas and New Year training in the mountains and I even put a turbo on my snowmobile, so that I could get used to the feel of a vehicle delivering power in that way, which was pretty awesome. And I'm excited to see the number 44 on my car again. It's the number I had when I started racing go-karts - the number plate on my Dad's car had a 44 on it, which is where it came from - and I won my first British championship with it, so it has been the family number ever since. Fingers crossed it will bring us luck as it did back then."