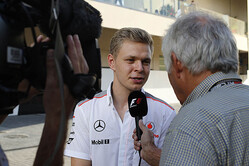 Making his Twitter debut, the day after his team announced the launch date of its 2014 contender (24 January), the Dane wrote: "Here's some news: my driver number will be 20 this year, which I won the Formula Renault 3.5 Series title with last year."

Last week, Romain Grosjean took to Facebook to reveal that his preferred number is 8 - his race number in 2013 - with 29 and 11 his back-up selections.

Thus far, nobody else has chosen 8 so the Lotus driver could be lucky, though Kimi Raikkonen and Jules Bianchi are both hoping to get number 7.

Though nobody else has, as yet, opted for 29, Grosjean's third choice (11) is the preferred number for Sergio Perez.

I the wake of the FIA's announcement that from this season drivers will be able to select permanent race numbers for the duration of their F1 careers, Fernando Alonso revealed that his preferred option is 14.